Thanks to some poor science and an uneducated public, water supplies world wide are being contaminated with a dangerous chemical under the guise of helping your teeth. Dr Robert Carton, a scientist who spent 20 years working for the US EPA said on CBC Nov. 24th, 1992, “Fluoridation is the greatest case of scientific fraud of this century, if not of all time.”

“Fluoride is a known toxin that causes cancer, severe bone fractures and retardation of children. Leading scientific institutions, major universities and Nobel laureates have exposed its danger, yet fluoride is being crammed into the water worldwide. The amount of solid scientific evidence that fluoride kills is overwhelming …A major university study conducted over decades compared rates of bone cancer in Northern Ireland, where water is fluoridated, and the South where water is not treated with fluoride. The rates of rare bone cancer were 45% higher in the North. The evidence that fluoride is a dangerous toxic waste that the New World Order is disposing of in our water supply is overwhelming.” -Alex Jones, “911 Descent into Tyranny”

In the 1950’s USAF Major George Jordan testified before Un-American Activity Committees of Congress that during his post as US-Soviet liaison officer, the Soviets openly admitted to “using fluoride in the water supplies in their concentration camps, to make the prisoners stupid, docile, and subservient.” The first experiments ever performed using fluoridated drinking water were done in Communist Russia and Nazi Germany’s concentration camps.

“It was Mellon and ALCOA which introduced the policy of putting fluoride into drinking water to make money from a by-product of the aluminum industry which at the time they were struggling to dispose of. It has nothing to do with saving teeth. Fluoride was actually used as a rat poison for 40 years and it is an intellect suppressant.” -David Icke, “The Biggest Secret” (385-6) 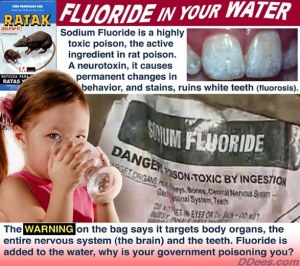 Fluoride is a Part II Poison under the UK Poisons Act of 1972. In Belgium, Germany, and Luxembourg water fluoridation was rejected by being rightly classified as “compulsive medication against the subject’s will,” a violation of fundamental human rights. 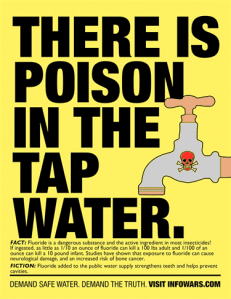 “If fluoridation creates such a public health hazard and does not significantly reduce tooth decay, why was fluoride ever added to the water supply? How is it that many areas around the country are still adding fluoride to the water supply? Fluoride is an industrial waste product. The 1920’s and 30’s saw the astronomical growth of the aluminum and phosphate fertilizer industries. Their rapid growth however gave rise to unexpected pollution problems. The pollutant, fluoride. Fluoride pollution of air damaged wildlife, crops, and livestock. Initially, these industries bought up the surrounding fluoride devastated areas. But when fluoride began to take its toll in human health, lawsuits and action by health officials forced the companies to install pollution control devices to trap the fluoride waste products. Unfortunately, this just shifted the problem from airborne fluorides to water borne fluorides and solid fluoride waste products, which were left to pollute rivers, streams, and ground water. One means of profitably disposing of fluoride was to sell it as a rat poison and insecticide. However, since there weren’t enough rats and insects around to poison, there still remained a problem of what to do with this excess fluoride. In addition, since fluoride is not biodegradable, excessive use of it as an insecticide and rodenticide would soon create a health hazard for humans.” -Alex Christopher, “Pandora’s Box – The Ultimate Unseen Hand Behind the New World Order” (419)

Fluoride is put into the water supply of many countries but is also found in toothpaste and other dental products, pesticides (sprayed onto food crops), pharmaceutical drugs, and processed foods. It is one of the main ingredients in PROZAC and Sarin Nerve Gas. For decades children in US schools have been given daily fluoride packets and told to swish it around their mouths for 3 minutes at the beginning of every school day. So under the guise of helping our children’s teeth, the Nazi-tested intellect suppressant is swished around every morning before the day’s indoctrination lessons. Then in the afternoon it’s caffeine and aspartame time with sodas. Coca-Cola is called such because it originally contained cocaine. It contains so much sugar/aspartame that they have to cut the taste with phosphoric acid so you won’t gag. In other words, they purposely load it with sugar/artificial sweetener for the drug effects, not for taste. Then they “balance it out” by adding a dangerous acid, large amounts of which cause health problems like ulcers and osteoporosis.

The chemicals in our water and soda are just the tip of an iceberg too large for this post. Suffice to say the majority of the “food” lining grocery store shelves is both starved of nutritional value and pumped full of dangerous drugs and chemicals.