Also connected and intertwined with the meridian system is the “chakra” system which runs from the base of the spine up to the top of the head. Chakra is Sanskrit for “wheel,” and signifies the 7 main energy centers in the body, each of which is located along the spinal column and corresponds directly to a major nerve ganglia, endocrine gland, or internal organ. These focal points of subtle energy have been measured electromagnetically and produce ten-fold stronger biofields than non-chakra points. They have physical manifestations but also extend into the energy body affecting us emotionally, psychologically, and spiritually as well. Briefly, the 7 chakras are as follows:

Muladhara, the red root chakra, is located in the perineum and relates to the gonads, adrenal medulla, and the pubococcygeus muscle that controls ejaculation. Psychologically the root chakra controls security, survival, and the fight-or-flight response.

Swadhisthana, the orange sacral chakra, is located in the sacrum and relates to the testes/ovaries, the genitourinary system and the adrenals. Psychologically the sacral chakra controls sexuality, relationships, violence, addictions, pleasure, creativity, and enthusiasm. 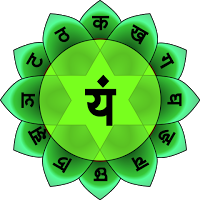 Anahata, the green or pink heart chakra, is located at the thymus in the middle of the chest and relates to the immune, circulatory, and endocrine systems, responsible for fending off disease, blood flow, and maturation of T-cells. Psychologically the heart chakra controls love, compassion, rejection, equilibrium and well-being.

Vishuddha, the blue throat chakra, is located at the thyroid, which produces the thyroid hormone responsible for growth and maturation. Psychologically the throat chakra is related to communication and growth through expression.

Sahasrara, the violet crown chakra, is located at the crown of the head and relates to the pituitary gland which secretes hormones to control the endocrine system and connects to the central nervous system via the hypothalamus. Psychologically the crown chakra is related to beingness, pure consciousness, and karma.

“Of the seven primary chakras that are deemed to mediate the awareness and energies of our personal energy field, five are considered to align primarily along the main meridians up our spine, one is between and slightly above our eye level, and the last sits at the crown of our head. Associated with nerve plexuses and the endocrine system of our bodies, which secretes and regulates hormonal balances, the chakras – as viewed by Eastern traditions – have a primary role in the mediation of consciousness. The electronic recordings of the human biofield were found to be strongest over the chakras. When the signal from the nervous system’s alternating field was filtered out, at frequencies above 500 cycles per second, the continuous low-intensity direct field seemed to be around ten times as high as the field through which the body’s nervous system is controlled, although its intensity is less than half that of a resting muscle.” -Ervin Laszlo and Jude Currivan, “Cosmos” (125)