Independently of David Bohm’s research, Stanford neuroscientist Karl Pribram proposed a holographic model for explaining the structure and function of the human brain.   His work strongly suggests that the brain stores information, not locally in so-called “engrams,” but holographically throughout its entirety.

“Interestingly, while Pribram and David Bohm began their work independently, both were using the same explanation to describe the results of their experiments. They were each applying the holographic model to make sense of life. Bohm, as a quantum physicist, was looking at the universe as a hologram. Pribram, as a neuroscientist, was studying the brain as a holographic processor … When the two theories are combined, what results is nothing less than a paradigm-shattering possibility.” -Gregg Braden, “The Divine Matrix” (113)

Individual memories were long thought to exist locally in specific areas of the brain; however, thanks to the work of Dr. Karl Pribram, Dr. Karl Lashley, Dr. Paul Pietsch and others, we now know this is not the case. Dr. Karl Lashley and other scientists have trained rats to navigate mazes, then removed their brains piece by piece, attempting to find where “engrams” (individual memories) exist. Strangely, however, in the experiments the rats always remember the training no matter which piece or how much of the brain is removed.

“Even after removing as much as 90 percent of a rat’s visual cortex (the part of the brain that receives and interprets what the eye sees), he found it could still perform tasks requiring complex visual skills. Similarly, research conducted by Pribram revealed that as much as 98 percent of a cat’s optic nerves can be severed without seriously impairing its ability to perform complex visual tasks. Such a situation was tantamount to believing that a movie audience could still enjoy a motion picture after 90 percent of the movie screen was missing, and his experiments presented once again a serious challenge to the standard understanding of how vision works.” -Michael Talbot, “The Holographic Universe” (18-9)

The orthodox explanation of vision is that the eye sees by taking a photographic image and reproducing it onto the cortical surface of the brain where we interpret it like an internal movie screen. Dr. Lashley’s experiments showed, however, that even when 90-98% of that internal projector screen is missing, the brain still receives and registers the whole movie! 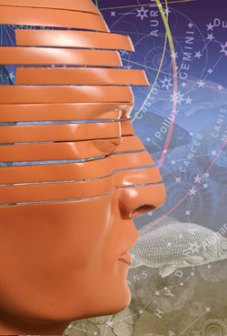 “Experiments demonstrated that animals retained memories and continued their lives even though the parts of their brains that were believed to hold these functions were removed. In other words, it appeared that there wasn’t a direct correspondence between the memories and a physical place in the brain. It was obvious that the mechanical view of brains and memory wasn’t the answer – something else strange and wonderful must be happening.” -Gregg Braden, “The Divine Matrix” (112)

These and other experiments have shown that Dr. Lashley’s engram theory of individual memories existing in certain areas of the brain is provably incorrect. Memories and images are distributed all throughout the brain, just like a picture is stored all throughout a piece of holographic film.

“Paul Pietsch began as an ardent disbeliever in Pribram’s theory. He was especially skeptical of Pribram’s claim that memories do not possess any specific location in the brain. To prove Pribram wrong, Pietsch devised a series of experiments … Pietsch reasoned that if a salamander’s feeding behavior is not confined to any specific location in the brain, then it should not matter how its brain is positioned in its head. If it did matter, Pribram’s theory would be disproven. He then flip-flopped the left and right hemispheres of a salamander’s brain, but to his dismay, as soon as it recovered, the salamander quickly resumed normal feeding. He took another salamander and turned its brain upside down. When it recovered, it too fed normally. Growing increasingly frustrated, he decided to resort to more drastic measures. In a series of over 700 operations he sliced, flipped, shuffled, subtracted, and even minced the brains of his hapless subjects, but always when he replaced what was left of their brains, their behavior returned to normal. These findings and others turned Pietsch into a believer.” -Michael Talbot, “The Holographic Universe” (26)

Salamanders were good subjects for this experiment because they simply go comatose when their brains are removed and then quickly regain normal functioning once it’s replaced. In Dr. Pietsch’s 700 trials he subtracted, sliced, diced, mashed, and even sausage-ground salamander brains but no matter what, after putting back whatever was left of their brains, they always regained normal functioning. 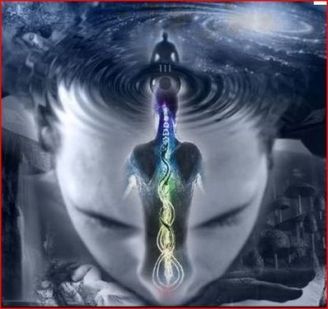 “Mainstream science has been unable to locate the area of the brain that contains all the memory because what we call memory exists throughout the brain and body. This must be the case because it’s a hologram. People with tumours, who have large parts of their brains removed, do not lose specific memories. They might not remember, in general, quite as well because they have moved to a smaller level of the holographic memory where there is less clarity than in the whole. But they don’t lose one memory completely and retain another in crystal clarity as they would if memory was located in one area. The body hologram stores information from all the senses and so when we smell something it can trigger a memory just as powerfully as sight or hearing. Even this is another level of the illusion because if the brain is a hologram it must also be illusory. It is, like everything in this reality, the ‘physical’ expression of a frequency field or resonance. Incidentally, the holographic nature of the body means the whole brain/body is involved in decoding the five senses and not just the ‘visual cortex’ and other areas of the brain associated with these specific duties.” –David Icke, “Infinite Love is the Only Truth, Everything Else is Illusion” (51)

So you can obliterate a salamander’s brain in any number of ways, and it will still have a normal life as long as you put a tiny piece of brain back in its head. You can teach a rat to run a maze, then remove any part of its brain, and it will still remember the run. You can remove 90% of a rat’s visual cortex and it will still perform complex visual tasks. You can sever 98% of a cat’s optic nerves and it will still see normally. These, along with many other experiments, strongly suggest that the brain processes images and stores information holographically (all parts in the whole and the whole in all parts) because the brain, like a hologram, no matter how small the piece, can still reconstruct the whole. 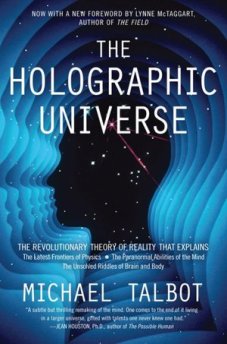 “Our brains mathematically construct objective reality by interpreting frequencies that are ultimately projections from another dimension, a deeper order of existence that is beyond both space and time: The brain is a hologram enfolded in a holographic universe … What is ‘out there’ is a vast ocean of waves and frequencies, and reality looks concrete to us only because our brains are able to take this holographic blur and convert it into the sticks and stones and other familiar objects that make up our world.” -Michael Talbot, “The Holographic Universe” (54)

In Michael Talbot’s “The Holographic Universe,” he suggests our experience of the smoothness of fine china or the feel of beach sand beneath our feet is like an elaborate version of the so-called “phantom limb syndrome” – when amputees can still “feel” their missing limb(s) long after having been removed. In other words, there are two realities, like Bohm’s implicate and explicate orders. In the implicate order, a “china cup” is just an energetic interference pattern vibrating at a certain frequency, but in the explicate order, after being filtered through the lens of our brains, eyes, and nervous systems, those interference patterns manifest to us as the look and feel of fine china. When asked, “so which is real and which is an illusion?” Dr. Pribram replied that, “both are real to me, or if you want to say, neither of them are real.”

“Although the metaphor of the holograph was important to Pribram, the real significance of his discovery was not holography per se, which conjures up a mental image of the three-dimensional ghostly projection, or a universe which is only our projection of it. It was the unique ability of quantum waves to store vast quantities of information in a totality and in three dimensions, and for our brains to be able to read this information and from this to create the world. Here was finally a mechanical device that seemed to replicate the way that the brain actually worked: how images were formed, how they were stored and how they could be recalled or associated with something else. Most important, it gave a clue to the biggest mystery of all for Pribram: how you could have localized tasks in the brain but process or store them throughout the larger whole. In a sense, holography is just convenient shorthand for wave interference – the language of The Field.” -Lynne McTaggart, “The Field: The Quest for the Secret Force of the Universe,” (84)

“So here we are – all part of this great hologram called Creation, which is everybody else’s Self … It’s all a cosmic play, and there is nothing but you!” -Itzhak Bentov