In the 1950s and 60s inventor Dennis Gabor discovered that when you photograph objects with a split light beam and store the information as wave interference patterns, you get a better image than with ordinary point-to-point intensity photographs. Not only is the captured image clearer, but it is completely three dimensional. 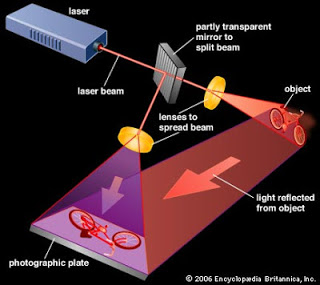 “In a classic laser hologram, a laser beam is split. One portion is reflected off an object – a china teacup, say – the other is reflected by several mirrors. They are then reunited and captured on a piece of photographic film. The result on the plate – which represents the interference pattern of these waves – resembles nothing more than a set of squiggles or concentric circles. However, when you shine a light beam from the same kind of laser through the film, what you see is a fully realized, incredibly detailed, three-dimensional virtual image of the china teacup floating in space (an example of this is the image of Princess Leia which gets generated by R2D2 in the first movie of the Star Wars series).” -Lynne McTaggart, “The Field: The Quest for the Secret Force of the Universe,” (83)

“A hologram is produced when a single laser light is split into two separate beams. The first beam is bounced off the object to be photographed. Then the second beam is allowed to collide with the reflected light of the first. When this happens they create an interference pattern which is then recorded on a piece of film … as soon as another laser beam is shined through the film, a three-dimensional image of the original object reappears. The three-dimensionality of such images is often eerily convincing. You can actually walk around a holographic projection and view it from different angles as you would a real object. However, if you reach out and try to touch it, your hand will waft right through it and you will discover there is really nothing there.” -Michael Talbot, “The Holographic Universe” (14-15)

The three-dimensionality of holographic images is not their only amazing attribute. In holograms, all parts are reflected in the whole and the whole is reflected in all parts, so if you chop a piece of holographic film into tiny bits then shine a laser onto any of them, no matter how small, you will still get a complete image. 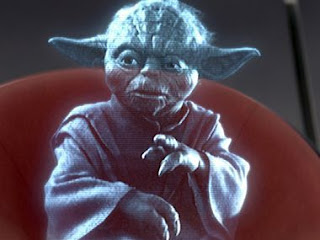 “Back in the 1980s, a series of bookmarks appeared on the market using holographic technology. Each one was made of a shiny strip of silver paper that looked like glossy aluminum foil at first glance. When the paper was held directly under a bright light and tilted back and forth, however … Suddenly, the images in the foil looked as though they’d come to life and were hovering in the air just above the paper itself … If you have one of these bookmarks, you can do an experiment to demonstrate for yourself just how a hologram works … use a sharp pair of scissors to cut your beautiful, shiny bookmark into hundreds of pieces of any shape. Then, take the smallest of the fragments and cut it again into an even tinier piece. If the bookmark is truly a hologram, you’ll be able to look at your tiny speck of a bookmark under a magnifying glass and still see the entire image, only on a smaller scale. The reason why is that it exists everywhere throughout the bookmark.” -Gregg Braden, “The Divine Matrix” (104-5) 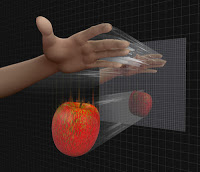 The “physical” world around us behaves much like a hologram. Just like a piece of holographic film, all quanta exist as interfering wave patterns. In and of themselves, these interference waves have no “solidity” – no definite properties or location – just like the squiggles/circles on holographic film. The image is distributed throughout the entire film, just as quanta are distributed throughout the entire universe. Then when a laser beam (the light of consciousness) is directed at those interference waves, seemingly solid particles (three dimensional images) appear before our eyes. One of the first physicists to consider this “cosmic hologram” metaphor was David Bohm who defined the universe as an “undivided wholeness in flowing motion” which he termed the “holomovement.” 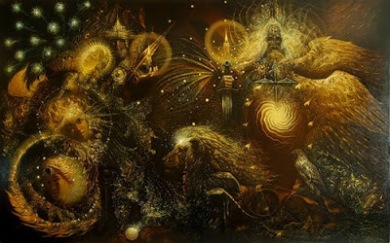 “Einstein’s protégé, American physicist David Bohm, felt that quantum theory suggested the existence of a deeper reality than the one presented by our senses. He dubbed the implicate order an undivided holistic realm that is beyond concepts like spacetime, matter, or energy. In the implicate order everything is fully enfolded or entangled with everything else. By contrast, the explicate order world of ordinary observations and common sense emerge, or unfold, out of the implicate order. Bohm used a hologram as a metaphor to illustrate how information about a whole system can be enfolded into an implicit structure, any part of which reflects the whole.” -Dean Radin, “Entangled Minds” (254) 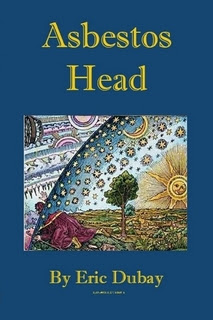 “If you blur your vision enough, forms disappear and you are left with nothing but a mass of color in motion. There is no word that describes the blur, but perhaps you make one up. Then you make a habit of making up words for blurs and start recognizing similarities – you label tree blurs, rock blurs, other animal blurs and maybe even atom blurs. This allows you to compare and categorize, make judgments, and express artistic concerns about the blurs, but the fact remains that the boundaries between blurs are perceptual, not actual. We know no two trees, rocks, animals, or atoms are exactly alike, but if no two things are exactly alike, we have no way to measure what constitutes one thing or it’s other. If no two things are exactly alike then there must be only one true form that is everything (i.e. the universal hologram) 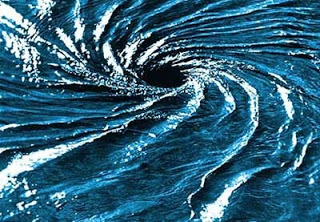 We know that sub-atomic particles are constantly in motion, but on a smaller scale than we can perceive. We know that the planet beneath us is constantly in motion, but on a larger scale than we can perceive. We know the Universe is perpetually changing and in motion, but we perceive most things as unchanging and still. Then we use language to label this fallacious stillness. We recognize similarities in the stillness and create categories and definitions. We forget all about our faulty premise and attribute a priori importance to these forms we perceive; though in fact knowing no two things are truly separate and everything’s constantly moving (a.k.a. the holomovement).”

“Bohm cautions that this does not mean the universe is a giant undifferentiated mass. Things can be part of an undivided whole and still possess their own unique qualities. To illustrate what he means he points to the little eddies and whirlpools that often form in a river. At a glance such eddies appear to be separate things and possess many individual characteristics such as size, rate, and direction of rotation, et cetera. But careful scrutiny reveals that it is impossible to determine where any given whirlpool ends and the river begins. Thus, Bohm is not suggesting that the differences between ‘things’ is meaningless. He merely wants us to be aware constantly that dividing various aspects of the holomovement into ‘things’ is always an abstraction, a way of making those aspects stand out in our perception by our way of thinking. In attempts to correct this, instead of calling different aspects of the holomovement ‘things,’ he prefers to call them ‘relatively independent subtotalities.” -Michael Talbot, “The Holographic Universe” (48-9) 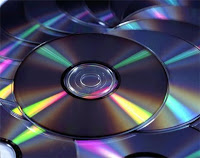 For Bohm, atoms are not the “building blocks of matter” but rather just a term given to one aspect of the holomovement. The various forms we name, words and categories we create, are all ultimately arbitrary because at the implicate level of reality, everything is one. No two atoms, two rocks, two trees, or two people are any more separate from one another than whirlpools are separate from the river. The universe is a holographic oneness in perpetual motion, both created and navigated by consciousness. Matter is not separated by space and time; rather, matter, space, and time are always already ever-present and one. To illustrate this, think of a DVD. At the explicate level of the DVD, you see a movie with people, places and events happening in space and time. For the actors on your television screen, they experienced everything happening in “real” time in the “real” world during filming. But for you the viewer, holding the DVD in your hand, you can see the implicate level of the movie where all the people, places, and events on it are mere projections of a single totality. You can rewind, fast-forward, slow-mo, or freeze-frame the entire realistic three-dimensional explicate world of the DVD because you are operating from the implicate world of remote control. The One, God, infinite consciousness, cosmic mind, or whatever you want to call it, operates at the objective, omnipresent, omniscient, omnipotent level of the implicate DVD, and meanwhile us humans, animals, plants, insects, and every other subjective entity in the physical universe are method actors in the explicate movie. Bohm himself said, “It will be ultimately misleading and indeed wrong to suppose, for example, that each human being is an independent actuality who interacts with other human beings and with nature. Rather, all these are projections of a single totality.” 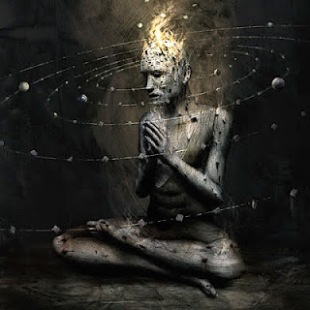 “While it may look as though we’re disconnected from one another and the rest of the world, that detachment doesn’t exist on the plane where the hologram originates … On this level of unity, there really can be no such things as ‘here’ and ‘there.’” -Gregg Braden, “The Divine Matrix” (107)

“Matter does not exist independently from so-called empty space. It is a part of space … Space is not empty. It is full, a plenum as opposed to a vacuum, and is the ground for the existence of everything, including ourselves.” -Michael Talbot, “The Holographic Universe” (51)

“David Bohm’s work into quantum physics and quantum mechanics also realized and affirmed a single ultimate reality; the true nature of the Universe. Time will inevitably show the Universal explicate, implicate and super implicate orders of David Bohm and the holomovement, will eventually have most profound implications for humanity which all science will quite simply have to accept sooner or later, thus proving conclusively the Universe rather than being a vast and disparate multitude of separately interacting particles of matter, is in reality a magnificent unbroken completeness, a continuum, an infinite flowing movement of Energy, vibration, the holomovement.” -Adrian Cooper, “Our Ultimate Reality” (88)