As someone who has attended church since before I could walk, in a family comprised entirely of devout Christians, and having read  the Bible cover to cover it has become increasingly clear to me that these holy scriptures were meant to be taken symbolically, not literally or historically.  Things like talking snakes and bushes, virgins giving birth, eating the body of Christ, staffs turning into serpents, and many other biblical “miracles” are all actually ancient spiritual symbolisms, found in many cultures/traditions around the world, thousands of years older than the Bible, referring to psychological phenomena, not historical events.  Of course snakes and bushes cannot talk, of course virgins cannot give birth, Christ isn’t a cannibal, wooden staffs cannot turn into living serpents, water cannot magically turn into wine, breads/fish cannot magically manifest from the aether, and humans cannot survive for days inside whale’s bellies.

2 Corinthians 3:6 clearly says the scriptures should NOT be read literally.  Matthew 13:34 says Jesus never spoke unless it was in parables.  He said people who took the word literally were like those who looked but could not see!  Modern fundamentalist Christians who read the Bible literally with their over-active left-brains are missing the whole point.  The reason Jesus cast nets to the right side, sits on the right side of God, and builds the door to the temple on the right side, is because he is leading us out of our lower left brains and into our holistic, symbolic, higher brain on the right.

This is what the Exodus of slaves out of lower Egypt is all about, a manual for spiritual enlightenment, not a literal slave revolt.  There is no history of 600,000 slaves leaving Egypt for Israel because it never happened, and Israel never used to be an actual place!  It was just three names of gods – Isis – Ra – Elohim, shortened to Is-ra-el. The real promised land Moses spoke of exists between your ears!  Acts 7:48 says, “The most high dwelleth not in temples made with hands.”  The only temples not built by human hands are the two temples behind your eyes, in front of your ears.  As said in 1 Corinthians 3:16, “Know ye not that ye are the temple of God, and that the spirit of God dwelleth in you?” 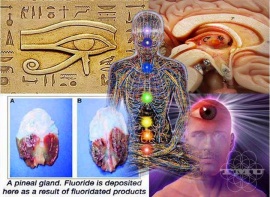 In Matthew 6:22 Jesus says, “The lamp of the body is the eye, if therefore thine eye be single, thy whole body shall be full of light.”  Genesis 32:30 states that, “Jacob called the place Peniel (Pineal), saying ‘it is because I saw God face to face.'”  In other words, Jesus and Jacob are referring to the Pineal gland, the “third-eye,” meditation point which lies at the geometric center of our brains.  When you slow your brain waves through meditation, sensory-deprivation, entheogens or other methods, your usually over-active left-brain eases off and allows access to the higher, holistic right brain and through to the pineal gland, which the Bible calls the dwelling place of God, and Descartes called the seat of the soul.

Romans 2:29 says, “He is a Jew who is one inwardly; and circumcision is that of the heart, in the spirit, and not in the letter.”  It doesn’t get any clearer than that.  The Bible is saying circumcision is of the heart, not the penis!  To focus on the spirit (the symbolic), not in the letter (the literal)!  And that Jews are anyone who is inwardly focused, those who seek God within, meditators, prayers, not a race or religion!  God doesn’t choose a race of people over others, God’s “chosen people” are simply devoted meditators.

These secrets of meditation were well known to many ancient civilizations the world over including Indian Yogis and Saddhus who integrated meditaiton, yoga and spiritual symbology into their holy scriptures as well.  Even the Atlantean mythos, one of the oldest known religious stories, encodes this ancient spiritual knowledge of “Kundalini Yoga.”  For instance, in the Atlantean myth, Atlas, the King of Atlantis, held up the entire world upon his shoulders.  He had seven daughters, the Hesperides, who spent their days dancing around the Tree of Life.  Coiled around the tree, and guarding its golden apples of immortality lived Ladon, the serpent.  The kingdom of Atlantis was shaped as three concentric circles of land separated by two concentric circles of water with the “Temple of Poseidon,” residing in the very center, where sacred bulls roamed around freely, and sacrificial bulls blood was poured over the exterior of the temple. 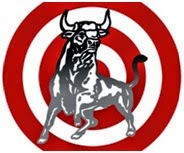 The actual medical term for the top 33rd vertebrae of the spine which holds up your skull is called “Atlas.”  So when it is said that Atlas holds the world upon his shoulders, it is your head/mind which he holds up, and your skull, when viewed from above, perfectly resembles Atlantis or a “bulls-eye.”  The bulls-eye at the center is your third-eye which “roams around freely” in a chamber of cerebro-spinal fluid.  This is surrounded by the cerebral cortex, which itself is covered by a layer of constantly flowing/pumping (sacrificial bull’s) blood, and enclosed by the skull cap: Three concentric circles of solid separated by two concentric circles of liquid.

The Tree of Life with Atlas’ seven dancing daughters and a serpent coiled around, is similar to symbolism found in the Bible and many other religions throughout history the world over.  In the ancient Indian yogic tradition, long pre-dating the Bible, the Tree of Life was your spine with seven “chakra” nerve/energy centers and transformational “kundalini serpent energy” coiled at the base.  Through yoga and meditation the kundalini serpent travels up the spine opening and illuminating the chakras one by one.  This is why Numbers 8:2 says, “Speak to Aaron, and say unto him, when thou lightest the lamps, the seven lamps shall give light over against the candlestick.”  The candlestick is your spine and the lamps your chakras (note: “chakra” means “wheel of light”).  In Exodus 7:10, “Moses and Aaron went in unto Pharaoh, and they did so as the Lord had commanded: and Aaron cast down his rod before Pharaoh, and before his servants, and it became a serpent.”  Again, Aaron’s rod is his spine, and the serpent is kundalini.  The Egyptian Pharaohs were also well aware of this spiritual symbology, as their traditional headdress was none other than a cobra hood with a serpent coming out their third-eye!  Revelation 5:1 reads, “And I saw in the right hand of him that sat on the throne a book written within and on the backside, sealed with seven seals,” just like your spine, your backside, sealed with seven chakras.

In another tale, taken literally by most Buddhists, Buddha was meditating under a tree when it began to rain heavily.  From behind him a huge king cobra came and coiled his body seven times around Buddha’s body to keep him warm and placed his hood over Buddha’s head to protect him from the rain.  After seven days, the rain stopped and the snake turned into a young man who thereafter became one of Buddha’s followers.  If you asked the average Christian if they believed these Buddhist miracles they would laugh at the idea of a snake turning into a man, but at the same time believe Moses and Aaron’s staffs turned into snakes! 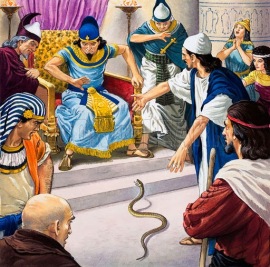 The number 7 appears an incredible 735 times in the Bible, more than any other number.  In Revelations alone there are 54 sevens including the 7 seals, 7 churches, 7 trumpets, 7 personages, 7 vials, 7 woes, 7 angels, 7 thunders, 7 plagues, 7 glories, and 7 blessings.  There are the 7 deadly sins, the 7 days of creation, 7 circles around the wall of Jericho, 7 years building the temple of Solomon, again and again the number 7 is given incredible significance over any other number in the Bible.  Christians say the number seven denotes “spiritual perfection” and “divine fullness, completeness, totality.”    But is that all, what is the real meaning of these, what is the origin of this numerology?

It is the same as Atlas’ seven daughters dancing around the Tree of Life.  It is the same reason seven lotus blossoms appeared under Buddha’s feet.  After the 7th day of creation, God had a millennial rest period of a thousand years, because the 7th crown chakra is known as the 1,000 petaled lotus!  These myths long pre-dated the Bible and were purposely encoded as symbolic keys to spiritual enlightenment.  They were never meant to be read literally or historically!  The reason Jesus lived 33 years, is the same reason the first temple of Solomon stood pristine for 33 years, Kind David ruled for 33 years, Leah had 33 children, Freemasons have 33 degrees, and Atlas is your 33rd vertebrae.  The spiritual numerology and symbolism in the Bible are there for those with eyes to see, but hidden under literal translation and interpretations by the very left-brained prisoners Jesus sought to free.

One Reply to “The Bible’s Hidden Meanings”