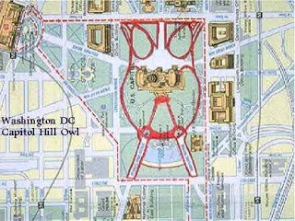 When French Freemason Pierre L’Enfant designed the layout of WashingtonD.C. he placed occult symbols everywhere. The most impressive of these directly relates to the Bohemian Grove society. When seen from an aerial view, the U.S. Congress building, surrounding roads, trees, and structures clearly form the picture of an owl sitting atop a pyramid.

“The roads within the grounds of the Congress Building make the very clear symbol of an owl! You also find that the owl is sitting on a pyramid. The pyramid and all seeing owl. The collective word for owls is a parliament of owls, which is uncannily appropriate. The same owl symbol can be found hidden on the dollar bill if you know where to look and you have a very powerful magnifying glass. I also understand a new pedestrianisation scheme around Nelson’s Column in Trafalgar Square, London, is going to look like an owl from above.” -David Icke, “The Biggest Secret” (357)

The same owl appears on the National Press Club logo, the Congress building, and the upper-right hand corner of every U.S. Dollar bill. What does this owl symbolize and why is it hidden in our architecture and currency?

“There is a sexual playground for leading American and foreign politicians, mobsters, bankers, businessmen, top entertainers, etc, who are initiates of the Babylonian Brotherhood. It is called Bohemian Grove, 75 miles north of San Francisco in California, near the hamlet of Monte Rio alongside the Russian River in Sonoma County. I went to the area in 1997 to have a look around and when I told the hotel receptionist where I was going she warned me to be very careful because some people who had been to investigate had never been seen again.” -David Icke, “The Biggest Secret” (327) 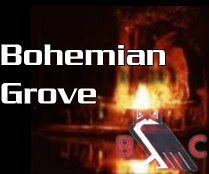 Bohemian Grove is a 2,700 acre forest retreat for the elite. Every July since 1873, hundreds (now thousands) of top politicians, bankers, businessmen, and media personalities gather at the grove for two weeks of events ranging from the expected, such as meetings, speeches and lectures, to the very unexpected, like drunken mass orgies and mock human sacrifice rituals affront a 40ft. tall statue of a Babylonian owl-god! Such craziness was often discounted as hearsay by naysayers, that is until Author/Filmmaker Alex Jones infiltrated the grove in 2000 and shot clear video footage of the “Cremation of Care” ritual in his film “Dark Secrets: Inside Bohemian Grove.” 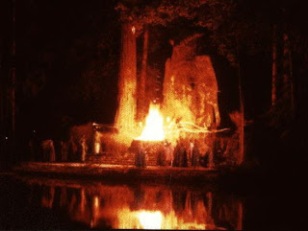 “At this point, I should digress and go back and say that as we were walking into the Grove we actually came within about ten yards of the 40 foot stone owl that sits to the north side of the small lake. We were only about seven yards away from the black altar that sits at the base of the owl. So, already at this point we had proven that rumor true: yes there is a giant stone owl – yes there is an altar … So, I was there witnessing something right out of the medieval painter Hieronymus Bosch’s Visions of Hell: burning metal crosses, priests in red and black robes with the high priest in a silver robe with a red cape, a burning body screaming in pain, a giant stone great-horned owl, world leaders, bankers, media and the head of academia engaged in these activities. It was total insanity.” -Alex Jones, “Occult Activities at Bohemian Grove” (http://illuminati-news.com/occult-activities-at-bohemian-grove.htm) 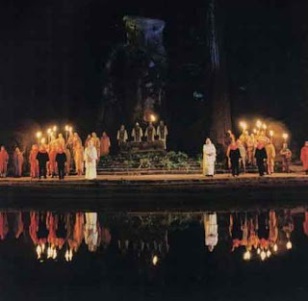 “Now, I have to ask you, what are ex-Presidents of the United States, such as Jimmy Carter, Richard Nixon, Gerald Ford, Ronald Reagan, and George Bush doing there? These are all living President’s – standing there in unison, the whole line of them, in uniforms, looking like Ku Klux Clan members, in front of a great bonfire, worshipping an owl.” -Jordan Maxwell, “Matrix of Power” 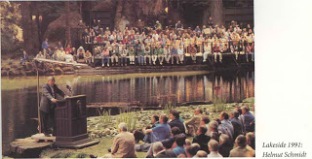 The last two weeks of July correspond to the sacred 13th moon and the Pagan New Year. These secret society members all know the Gregorian calendar is a farce so they don’t party on January 1st (a meaningless day and completely arbitrary New Year). They all gather at Bohemian Grove to celebrate the July 25th “Day Out of Time” and the July 26th Lunar New Year.

“The last two weeks of July, of every year, a secret meeting is held in our country in northern California, by the world’s most powerful people. Bankers, politicians, industrialists, entertainment luminaries, a huge composite of puissant world figures. This group is directly linked with the European ruling elites, and is commonly known as the Bohemian Society. Our now famous Council of Foreign Relations, the government behind the American government, is represented at the Bohemian Grove, along with members of the Bilderberger Group of Europe. A meeting is held, once a year there, to decide on a worldwide scale a manipulative agenda concerning your future. A shining example of true democracy carried on in the dark. Obviously, here, your vote doesn’t count. Appropriately, the owl was chosen as a symbol for this ilk, for it, too, is at home in the dark. The name bohemian carries a dictionary definition as, ‘A community of persons who adopt manners and mores, conspicuously different from those expected, or approved of by the majority of society who disregard conventional standards of behavior.’ No wonder they want no input from you.” -Jordan Maxwell, “Matrix of Power”