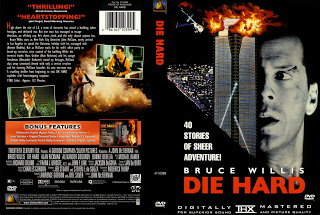 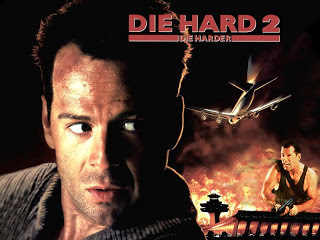 In Hollywood’s many Masonic productions, we find the 9/11 World Trade Center “terrorist” attacks alluded to in several films long before 2001! (This propaganda technique is known as Predictive Programming or Revelation of the Method)  In 20th Century Fox’s 1988 film Die Hard the first lines are spoken on a plane about how to get over the fear of flying. One guy says what he has done for 9 years and Bruce Willis says what he has been doing for 11 years. So here we have 911, on a plane, talking about fears of flying, from a Masonic production company (notice the one-eye symbolism). In the first Die Hard, John McClane (Bruce Willis) takes on 12 terrorists in a tower; in the second movie it’s terrorists at an airport. Isn’t it interesting how in the 1988 movie we have John McClane afraid of flying, terrorists, towers, 9/11, and in 2008 we had John McCain on a presidential fear campaign revolving around terrorists, towers, and 9/11?

In 1998 we also have Bruce Willis saving the world in Masonic Disney/Touchstone’s Armageddon. Toward the end of the movie there is a countdown which passes 9:11 minutes just as the camera pans past.

In another 1998 Disney/Touchstone film, Enemy of the State, a politician played by Jon Voight has his birthday on September 11th.

In Warner Bros. 1990 film Gremlins 2 there are two reporters from channels 9 and 11 holding microphones with those numbers juxtaposed.

In the 1990 Universal film Problem Child the Healy’s live at house number 911. The actor in this movie, John Ritter, in real life had a baby girl, Stella Ritter born on 9/11/98, then 5 years later suddenly and suspiciously John died on 9/11/03. At first glance these synchronicities may seem like mere coincidence until you realize their Masonic significance, and Hollywood’s Masonic dominance.

In the 1993 Super Mario Brothers movie the Two Towers are depicted eerily half destroyed and smoking just as they would be on 9/11/01. In the movie, the Twin Towers each have on them a large symbol of a hand holding two lightning bolts. This is the very aspect of Tarot imagery from “The Tower” card substituted by “hijacked” planes on 9/11.

In 33rd Degree Mason James Cameron and Columbia Tri-Star’s 1991 Terminator II, Judgment Day, there is an overpass that warns “Caution 9-11.”

The same year in Columbia’s The Patriot, Mel Gibson’s first words, weighing a chair, in the film, are: “9 pounds, 11 ounces, perfect.” Here we have 911, the “patriotic” concept of the post-911 “Patriot Act,” a Masonic production company, a Masonic measuring device and symbol of the mystery schools, ounces or OZ (77) revenge of Lamech, and the closing word, “perfect.”

In 1997 DreamWorks’ first film, The Peacemaker, George Clooney is shot perfectly between aisle 9 and 11.

In a 1997 episode of the Simpsons, Lisa holds up a magazine that reads “New York $9” with a picture of the Twin Towers after the 9 which looks like 911.

In 2000’s Traffic, a large delivery truck is shown full of boxes, and on every single box are a Scorpio/scorpion symbol and the number 911.

In March, 2001 (6 months before 9/11) the pilot episode for The Lone Gunman aired on FOX with the plotline of terrorists hijacking a plane and crashing it into the World Trade Center! 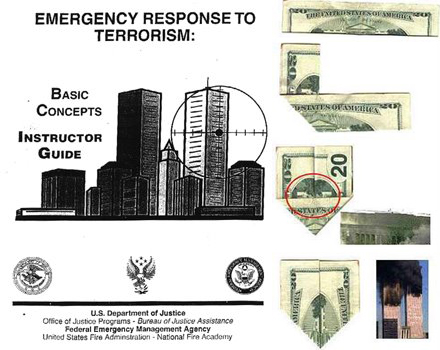 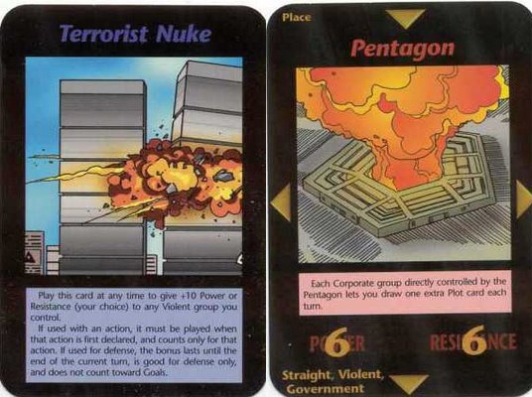 In 1998 the U.S. Department of Justice FEMA Emergency Response to Terrorism Guide had a cover picture showing the World Trade Center in crosshairs.  Another symbolic representation of the 9/11 events was encoded into the year 2000 $20 bill which when folded a certain way resembles the smoking/damaged Twin Towers and the Pentagon.  Rap group “The Coup” album “Party Music” which came out just after 9/11, originally in June 2001, had an album cover featuring the artists affront both WTC towers which have huge explosions/smoke clouds from the upper floors.  And in Steve Jackson’s 1995 “Illuminati – New World Order” role-playing card game, he “predicted” both the attacks on the Pentagon and the World Trade Center.  Granted some of this pre 9/11 symbolism could be sheer coincidence, but can you honestly explain away all these synchronicities so simply?

The Hebrew Kabalistic Tree of Life (studied in-depth by Masons) displays the Roman numerals IX-XI (9-11) when the tree has “fallen” or is shown on its side.  And in the Tarot (also studied by Masons) there is much significance as well. The Major Arcana card “The Tower” shows a tall tower being struck by lightning, fire coming out the windows, and people falling to their deaths – all of which happened on 9/11, if the lightning is symbolically substituted by an airplane. In “The High Priestess” tarot card, Isis (the Statue of Liberty) is seen between the black and white Masonic pillars of Mercy and Severity, Boaz and Jachin (the Two Towers). The 13th “Death” tarot card also shows two towers with the sun between them.

In Freemasonry the two/three pillars are very important and well-known to every Mason. One of the largest Masonic websites is called “The Three Pillars.” 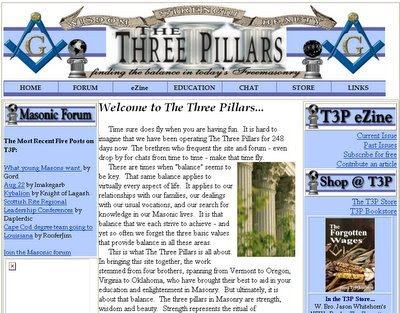 They are depicted on the 1st degree tracing board and they are the 3 columns of the Kabalistic Tree of Life. The pillars of Solomon’s temple – Sol-Om-On three words all meaning “Sun” – relate to this as well (note: WTC 7 was the Salomon Brothers Building). The right pillar of Mercy is Male and the left pillar of Severity is Female. Between them is the third androgynous pillar of enlightenment and illumination. This is symbolically depicted in the Tarot Death card where the sun is rising between two towers/pillars. In Da Vinci’s Last Supper, the back wall with two windows can be viewed as three towers/pillars. On the right is a man pointing representing the phallic/masculine, on the left is a very effeminate John representing the feminine, and the Sun/Son Jesus is in the middle.

In the movie Spider-Man there was a deleted-scene with the sun rising between the Twin Towers symbolizing this as well. 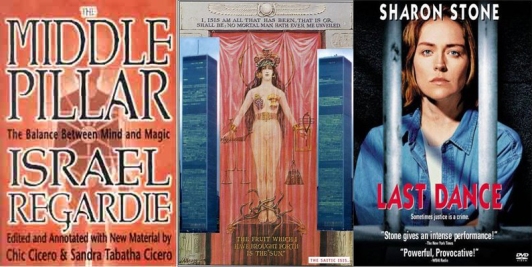 Notice (SS) Sharon Stone like ISIS is between the two pillars/bars. Just as Isis holds the scales of Justice in her hands, the caption to “Last Dance” says “Sometimes Justice is a Crime.”

“More important, however, is the fact that Mary Magdalene can be seen as being associated with both a tower and the number seven. The name Magdalene can be literally translated from the Greek as meaning ‘tower’ and, as we have seen , this association between the terms ‘tower’ and ‘seven’ is present in the famous Biblical quotation: Behold, therefore I am against thee, and against thy rivers, and will make the land of Egypt utterly waste and desolate, from the Tower of Seven even unto the border of Ethiopia. So, Ezekiel’s ‘Tower of Seven’ is none other than the Egyptian ‘Magdal of Sefekh,’ the same title that is now being associated with Mary Magdalene. The Tower of Sefekh was historically seen to be a prime symbol of Egypt and because of his notoriety it has already been identified as with the Great Pyramid (The Great Tower) of Egypt.” –Ralph Ellis, “Solomon Falcon of Sheba” (126-7) 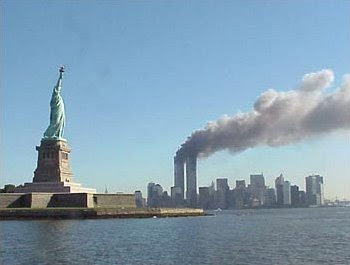 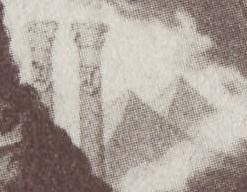 So overlooking the 7 World Trade Center towers is the Statue of Liberty, Isis/Mary the Tower of Seven, wearing a 7-pointed crown. Just as in the sky Sirius (Isis) stands beside the 3 stars of Orion’s (Osirus’) Belt, on the ground Isis (the Statue of Liberty) stands beside 3 collapsing towers. The three buildings that collapsed, buildings 1, 2 and 7, perfectly replicate in size and distance both the 3 pyramids at Giza and the 3 stars in Orion’s Belt. 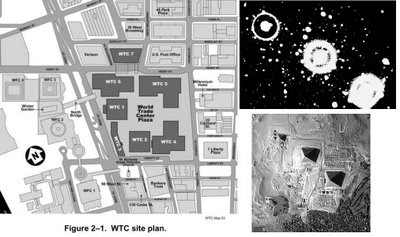 WTC buildings 1 and 2 were very tall with a shorter building 7 off to the side. Similarly, there are 2 large pyramids at Giza and a smaller pyramid off to the side. Not to mention, before being destroyed on 9/11 there actually stood a huge model of the 3 Giza pyramids at the base of the WorldTradeCenter. 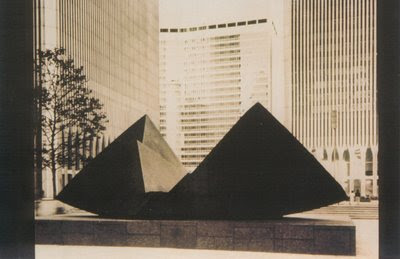 The Giza pyramids themselves were modeled after Orion’s Belt which consists of 2 bright stars and another slightly less bright one off to the side. The ancient Egyptians associated Orion’s Belt with the God Osirus, the husband of Isis/Sirius. Their son is our sun, Horus, the Egyptian Jesus.

“For instance, this is why the tracing board portrays the three pillars as all being of different heights, with two larger pillars in the foreground and a much smaller one behind. This is not simply a matter of perspective, as the two foreground pillars are placed at exactly the same depth within the picture, but are given slightly different heights; while a much smaller pillar lies behind. Yet this depiction exactly reflects the reality at Giza, where two major pyramids are nearly but not quite of the same height, while the third is much smaller.” -Ralph Ellis, “Eden in Egypt” (165) 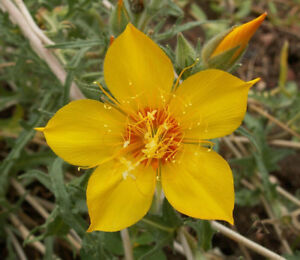 Sirius, the dog-star, is so called because it lies in the constellation Canis Major. Canine, Latin for dog, was shortened by the Masons/Hollywood to K-9 in Doctor Who and Rin Tin Tin K-9 Cop. NASA even has a Mars rover called K-9. Since K is the 11th letter of the alphabet, K-9 is numerically 119 or 911.

Before 1679 the constellation Columba (the Dove) occupied the same space as (was one with) Canis Major/Sirius. Since then the two constellations have drifted apart, but symbolically the Illuminati still associate the Dove with Sirius/Isis/Mary.

The Columbine “blazing star” flower, Colombe meaning Dove, is a 5-petaled flower. In ancient Egypt the hieroglyph for Sirius included a 5-pointed star. In the U.S. District of “Columbia” the Masons built numerous 5-pointed star pentagrams into the roads/architecture. Is it not coincidental how the 5-sided Pentagon building would be attacked on 9/11, the same day it began construction 60 years prior? And is it not interesting how the numbers 911 and 5 relate back to Sirius the K-9, and Sirius the Columbine 5-pointed blazing star?