During the 1790s French Freemason Pierre L’Enfant designed the street plan and architectural layout of Washington D.C. to include many occult talismans. If you see D.C. from an aerial view, you may be shocked to find things like an iron cross (used by Hitler), the Star of David (used by the Rothschilds), an upside down (satanic) pentagram pointing to the White House, and even a pyramid with a huge owl sitting atop at the Capitol building. The Egyptian hieroglyph for the Illuminati Goddess Isis/Sirius is a star, an oval, and an obelisk all drawn together. In Washington D.C. there just happens to be the Washington Monument obelisk, the Oval office, and a pentagram encoded in the streets/architecture.

“The Egyptian hierogram for the star Sirius consists of three shapes: a five-pointed star, an oval, and an obelisk. Amazingly, this is just what we find in stone in Washington D.C. The entire city is dedicated astromantically to the star Sirius and its occult deities. Astrology is good enough for the ruling Plutocrats it seems. Pity that when the ordinary person seeks to use the divination arts for their own personal physical and spiritual empowerment, they are considered freaks and devil-worshippers.” -David Ovason, “Secret Architecture of Our Nation’s Capitol”

In Washington DC we have the phallic “Monument” facing the female “Oval” office, plus the pentagon and L’Enfant’s pentagrams. In Paris we find “Cleopatra’s Needle” another obelisk in front of the Notre Dame (“Virgin” Mary’s) Cathedral. The Vatican has another masculine obelisk surrounded by a feminine circular building structure. In London, New York, and many other places you will find the same. The Brotherhood has placed their sexual architecture at key geomantic points all over the Earth.

“The obelisk and the dome are common sights in the monuments and buildings of the Brotherhood. The obelisk is an ancient phallic symbol of the male energy and solar energy and the dome represents the female or moon energy. Often they are placed together or close to each other. This is the symbolism of the Oval Office (the womb, female) in the White House which looks out on the Washington Monument, the vast stone obelisk (phallic, male). These symbols attract and generate the energy they represent: they are a physical thought form. The obelisk also symbolizes the penis of the Egyptian Sun god, Osiris. According to legend, after Osiris had been sliced into pieces by his rival, Set, the Queen Isis found all the pieces except his willy. An obelisk claimed to come from Alexandria in Egypt stands in Central Park, New York, and its twin was erected in the 19th century, during the reign of Queen Victoria, on the former Templar lands alongside the River Thames not far from the Houses of Parliament. It is known as Cleopatra’s Needle and originally stood in On (Heliopolis), the Egyptian City of the Sun, from at least 1500 BC, before it was moved to Alexandria... A sphinx has been placed on either side at its London location. Another Egyptian obelisk which was built in Luxor 3,200 years ago now stands in the Place de Concorde in Paris, less than a minute’s drive from the scene of Diana’s crash. On the other side of the crash scene is the Eiffel Tower, another gigantic obelisk in disguise. The Washington Monument in Washington DC is a colossal obelisk. The dome (from a Greek word meaning Place of the Gods) draws in and harnesses energy, as does the pyramid.” -David Icke, “The Biggest Secret” (354)

They also keep the secrets of ancient ley lines and continue building along them. For instance the cities of Boston, New York, Philadelphia, Baltimore, and WashingtonD.C. are all on a perfect diagonal that continues down to Teohitican and all the way up to Stonehenge, Troy, and Baalbak. London to Giza and Paris to Dendera are almost equidistant parallel lines as well. This geomantic knowledge was understood and kept hidden by ancient builders/Masons and remains that way today.

“Has anyone ever asked themselves why a war memorial nearly always has to be an obelisk? And why do you think the Washington monument in the centre of Washington DC is a giant obelisk? Because obelisks, like all these symbols and geometrical shapes, generate the energy they represent. I remember climbing some stone steps inside a big obelisk near Hebden Bridge in England and feelig enormous male sexual energy all around me. I wondered what on Earth was happening until I remembered where I was … inside a male penis in effect. What a symbol is built to represent is the energy it will generate, because symbols are a physical manifestation of the thoughts which create them. These guys don’t put their symbols everywhere just for fun. They do it because it helps to resonate the energy field to the vibrational frequency they want. In turn, this affects the thoughts and feelings of the people.” -David Icke, “The Biggest Secret” (136)

“The extraordinary truth is that the very existence of the Washington Monument is intimately linked with the Egyptian star, Sirius the Sihor, which the ancients represented in their sacred hieroglyphics as an obelisk as well as a star. How is it possible that this most important star of the ancient world should find itself, as it were, resurrected in the architecture of the United States. …in the course of that day, when the cornerstone of the Washington Monument was laid, the Sun would have passed over Sirius … Computations clearly show that on the day the Declaration of Independence was agreed in Philadelphia, the Sun was on Sirius. The Mason who first signed the Declaration of Independence would have been aware of the particular significance of July 4 as a cosmic event. The day was the second in the so-called dog days…which begin on July 3. The dog days are so-called because they refer to the rising of the star Sirius.” -David Ovason, “Secret Architecture of Our Nation’s Capitol”

The Masons are very familiar with astrology, astronomy and astrotheology. They align all important commemorations, dedications, declarations, ground-breakings, grand-openings, and other events to coincide with astrological phenomena.

“In the years following the Revolution, the Masonic fraternities held ceremonial layings for such new enterprises as bridges, locks, universities, government buildings, statehouses, memorials, and even churches. Such buildings were aligned with the stars, and with the spiritual beings who ruled the stars … Although a survey of the foundation charts used in the early phase of the building of Washington, D.C. reveals the importance of astrology, and, indeed, confirms beyond doubt that astrology played an important role in the early Masonic rites, the rationale of astrology was rarely discussed openly, even in Masonic documents. Knowledge of the stars – insofar as they were understood in Masonic circles – was preserved as secrets best left to those with specialist knowledge of such things.” -David Ovason, “Secret Architecture of our Nation’s Capital” (124) 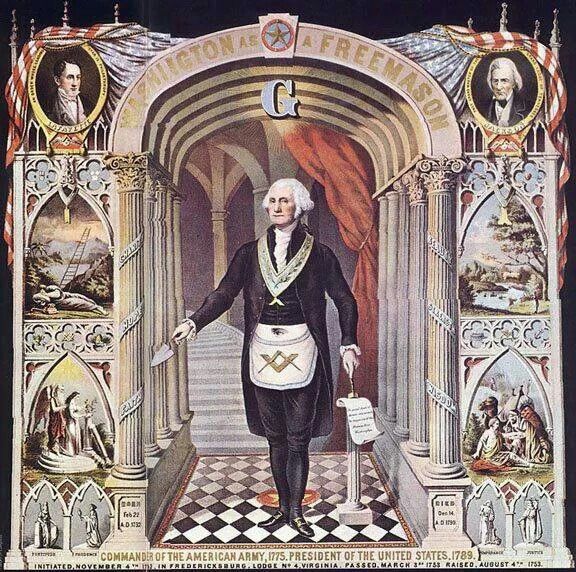 August 7, 1880 at precisely 10:59am the cornerstone of the Washington Monument obelisk was laid just as the Sun passed over Sirius. The day the foundation stone for the White House was laid, around noon the Moon entered the same 23rd degree of Virgo as the Dragon’s Head node. On the morning of September 18th, 1793, the Sun was also passing through this degree of Virgo when the Capitol building was founded. When the Library of Congress was founded the Sun and Saturn were in conjunction in Virgo. And when the Scottish Rite Freemason “House of the Temple” cornerstone was laid on October 18th, 1911, the Moon and Venus were conjunct in Virgo.

“The chances of the correspondence being mere coincidence are so remote that we must assume that whoever was directing the planning of Washington, D.C., not only had a considerable knowledge of astrology, but had a vested interest in emphasizing the role of the sign Virgo … Time and time again we shall see that a knowledge of the stars played an important part in every stage of the creative phases in the construction of the city.” -David Ovason, “Secret Architecture of our Nation’s Capital” (65-6)

The White House, Capitol building, and Washington Monument form the “Federal Triangle” which mirrors on the ground, Arcturus, Spica, and Regulus in the sky – three stars that bracket Virgo. In Washington D.C. there are 22 full zodiacs secreted into the architecture, most of them highlighting Virgo. This is the highest concentration of zodiacal art/symbology in the world, compared with only 4 in London for example.

“On evenings from August 10th to the 15th, as the Sun sets over Pennsylvania Avenue, the Constellation Virgo appears in the sky above the White House and the Federal Triangle. At that same moment, the setting Sun appears precisely above the apex of a stone pyramid in the Old Post Office tower, which is just wide enough to occlude the solar disc. According to the 19th century Freemason, Ross Parsons, ‘The Assumption of the Virgin Mary is fixed on the 15th of August, because at that time the Sun is so entirely in the constellation of Virgo that the stars of which it is composed are rendered invisible in the bright effulgency of his rays.’” -David Ovason, “Secret Architecture of our Nation’s Capital”

“Man has always felt the need to dominate and nowhere and at no time is the desire more prevalent than in this modern era. If it were not so, why all the need for secret societies? If we are ruled by an open system run by democratically elected officials, why the need for a secret Masonic order in every village, town and city across the United States? How is it that Freemasonry can operate so openly and yet keep its secrets so well hidden?” -John Coleman, “Conspirators Hierarchy”