Why is the highest military rank a 5-star general, who wears 5, 5-pointed gold stars? Why do Sheriffs wear a 6-pointed gold star? What do these occult amulets/symbols have to do with protecting the country?

“In Kritias, Plato wrote that the numbers 5 and 6 were sacred in Atlantis, where they were encoded in architecture, art, and ceremonial life ‘to honor the odd and even days.’ The Atlanteans’ choice of these numerals reflects their holistic religion, the ‘Navel of the World,’ whose adherents strove for spiritual synthesis and balance. The number 5 represents the male principle of conscious outward action, while 6 stands for female intuitive receptivity.” -Frank Joseph, “The Atlantis Encyclopedia” (206) 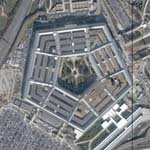 Modern occultists believe 5 to be the Number of Death. The greatest intensification of any number is its triplicate, making 555 literally “Highest Death.” Could this be why the highest military rank (5-star generals) wear 5, 5-pointed stars on their uniform? Could this be why the US Pentagon building is 5 concentric, 5-sided pentagons, with an inner-court of exactly 5 acres? The co-designer of the Pentagon, Jack Whiteside Parsons, was indeed an occultist and high priest in the OTO secret society.

“Jack Parsons, American rocket scientist, founder of California’s Jet Propulsion Laboratory, and a priest of the O.T.O., was, like Mormon Joseph Smith, a premier servant of Satan and a rebel against God. He even fancied himself to be the prophesied antichrist. Parsons wrote this chilling paragraph in his diary: And thus was I antichrist loosed in the world; and to this am I pledged, that the work of the beast shall be fulfilled, and the way for the coming of BABALON be made open and I shall not cease or rest until these things are accomplished.” -Texe Marrs, “Codex Magica” (44)

During World War II, the US Department of War began construction of the Pentagon and changed its name to the Department of Defense. Since then, the US government has conducted countless undeclared wars and propagated them to the public as merely defensive measures, pre-emptive strikes, or unavoidable conflicts/stand-offs.

Both the notorious Illuminists John D. Rockefeller and Amschel Bauer Rothschild had 5 sons. If 5 is the male energy of outward action, then 5 sons/suns is the highest resonator of that principle. It is also interesting that so many of the corporate pre-planned boy/girl bands, bands created by corporations, not by the musicians themselves, such as the Spice Girls, Pussy Cat Dolls, New Kids on the Block, Backstreet Boys, and N’Sync all have 5 band members and each member represents/acts/dresses in a certain unique way – the bad boy, the pretty boy, the prep, the hippie, etc. The whole idea seems to follow an occult/zodiacal agenda, using personality types to sell products.

“In ancient and modern occultism the “E” is very important because it represents the fifth essence or the quintessence … It represents a spiritual power of transcendence – The number 5. So you will always find something in a corporate logo that will tweak the “E” for a reason. It will always be highlighted in some way, or separated in some way, or dropped in some way.” -Michael Tsarion, “The Subversive Use of Sacred Symbolism in the Media” Lecture at Conspiracy Con 2003

Take note of Es in corporate logos, since E is the 5th letter of the alphabet it is very often highlighted or drawn differently than the other letters. Intel drops the E, Acer makes the E super-thin, Crest and Lee place a sunburst behind the E. E-Force has the Illuminati pyramid and Microsoft Internet Explorer uses the “e” icon with Saturn’s ring around it. Take special note of logos like E-Bay, E-Trade, ESPN, Dell, Esprit, Express, EB, EA Sports/Games, A&E, FedEx, Enconcept Academy and many more. There are most certainly occultists in high places on Madison Avenue and the advertising industry.