“The truth of the matter is that you do have those standby provisions, and the statutory emergency plans are there whereby you could, in the name of stopping terrorism, apprehend, invoke the military, and arrest Americans and hold them in detention camps.” – U.S. Representative Henry Gonzalez, Aug 29th, 1994

“Today, the New World Order has brought in hundreds of thousands of foreign troops into the United States, they have brought in thousands, if not hundreds of thousands of guillotines for executions, they have built a network of unused concentration camps across the U.S., they have built crematoriums next to these concentration camps, and yet most Americans appear to believe the lies of President Clinton and others.” -Fritz Springmeier, “Bloodlines of the Illuminati” (note: Fritz Springmeier has been in prison since 11/13/03 after being framed)

Since the Reagan administration, REX-84 U.S. Civilian Inmate Labor program has been drawn up, implemented, and expanded in many ways. The military and police have been increasingly training together. The military has been running operations like “Urban Warrior” fully-armed in suburbia. 800+ FEMA detention centers (concentration camps) have already been built all over the United States and Halliburton’s engineering subsidiary KBR is busy building more. These camps are complete with biometric scanners, barbed wire facing inwards, gas lines and furnaces, heli-pads, watchtowers, and security cameras. The few journalists who have filmed and reported on these have been observed by black helicopters and even approached and questioned by secret servicemen (see Google or you tube videos of “FEMA camps”).

“The Civilian Inmate Labor Program was conducted in secret at US military bases from 1989 to 1996. This nightmare program was recently declassified. If Civilian Inmate Labor Programs are so wonderful, why did the Army keep them secret for over seven years? There are thousands of pages of documents on the Army’s website detailing the massive scope of this program, much of which is still secret. Many of the documents are contradictory. For example, on the same page it will say that the Army is not allowed to house and use State inmate labor, and, in the next paragraph will say that they have been housing and using State inmate labor …For years, we warned people about FEMA (Federal Emergency Management Agency). The federal documents have been around for decades and include round-up plans and concentration camps. People used to laugh at us when we said this in December of 1999. Then came Seattle. FEMA housed and protected government-placed ‘anarchist’ provocateurs, but put five hundred peaceful demonstrators in a FEMA camp on the outskirts of town. FEMA used the old Sand Point naval brig to detain hundreds of American citizens.” -Alex Jones, “911 Descent into Tyranny”

“FEMA can force the population to live and work wherever they are told. People can be moved from their homes and have their property seized, including farms and businesses. Their children can be taken away from them and FEMA has the power to take over all communications, food and energy sources, health care, finance, education, welfare and transportation including your personal vehicles. The Postmaster General can order that all men, women and children are registered. It is also FEMA that controls the network of concentration camps, or ‘detention centers,’ in the United States that are in place and waiting for the dissidents and ‘troublemakers’ when the Illuminati fascist takeover is complete. Yes, concentration camps in America.” -David Icke, “Alice in Wonderland and the World Trade Center” (199)

In the past few decades, the militarization of the American police has become a noticeable reality as soldiers and police cadets increasingly train together. Paramilitary units, unheard of 40 years ago, are now the norm in over 90% of all police forces and their frequency of use has skyrocketed 2,000% in the past decade. Reporter Alex Jones has detailed the militarization of American police and covered urban warfare drills in his excellent “Police State” documentary films, all of which are available for free on google/youtube. Also check out his latest and greatest police state film here: Police State 4: The Rise of FEMA 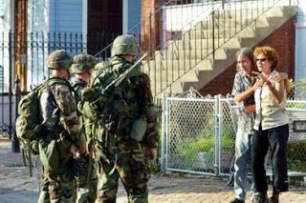 “I’m in northern California, in Oakland, where Marines have come in for Operation Urban Warrior, which should be deemed Operation Desensitization of the Population. They hire hundreds of role players to beg and scream, ‘We’re Americans. Please don’t put us in camps. Don’t take our guns.’ The loudspeakers blare as women and children are led handcuffed to the interrogation center of the camp: ‘Attention. Attention. Attention. Due to the large number of people arriving, you will experience a short delay. Please remain calm and cooperate so that we can process you into the camp faster.’ … In my film, Police State 2000, we have footage of Marines backed up by local police ordering a man with a camera to stop filming and to turn his camera off. There are two questions here: 1. What is it that they have to hide? 2. Why are Marines engaging in law enforcement activities that violate the First Amendment?” -Alex Jones, “911 Descent into Tyranny”

“Across the country, SWAT teams are putting the finishing touches on our new prison style schools, by conditioning our kids with “mock-terrorist/school shooting attacks.” SWAT teams’ so-called anti-terror drills at schools are really just conditioning exercises that are part of Federally-funded FEMA programs to condition the children that it’s completely normal to have men dressed up like executioners screaming at them, taking over their schools without warrants, and ordering them, with their hands behind their heads, onto busses where they are taken to undisclosed locations …Men in black uniforms yell and scream and throw profanities at them (that we won’t print here) as they beg and cry and plead. They are then loaded on buses and taken to a local jail where they are dragged around like filth and treated like criminals. A whole generation is learning how to be slaves, learning how to bow down and beg and to put their hands behind their heads when the ‘ring wraiths,’ the ‘dark lords’ appear. And many of these children died at the hands of SWAT teams. SWAT teams are notoriously trigger-happy and frequently shoot their own officers. Take Fort Worth, Texas, where the ‘Cop of the Year’ was shot in the head by one of his comrades at a SWAT team drill at a school. In Detroit, they shot a kid in the face in one of these so-called drills.” -Alex Jones, “911 Descent into Tyranny”

The US military has built at least 140 Deep Underground Military Bases (known as D.U.M.B.s because the general public is too dumb to realize). Worldwide there are nearly 15,000. Reportedly under construction since the 1940s, these bases are on average the size of a small city, 10 – 30 miles across with an average depth of 4 miles. They are carved out by massive nuclear powered laser drilling machines and connected by underground mag-lev train lines. The bases are stocked with food/supplies and have the ability to grow crops with artificial lighting. Why do you think governments around the world are building huge networks of underground cities? Why are they secret? Where do you think the money comes from to build these? 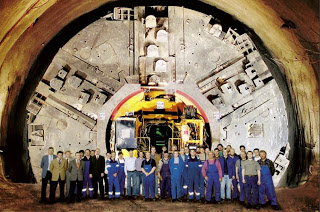 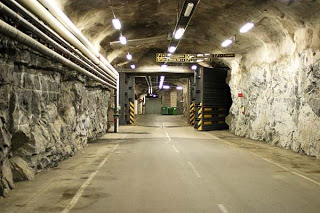