I’ve been discussing this with many people, it’s very simple, and most everyone agrees. All governments are immoral and criminal institutions because they force everyone under threat of violence to pay mandatory taxes for life. There are hundreds of taxes from property tax, to income tax, to inheritance tax; you must pay them all or else the government will use the power/force of it’s machinery to seize your bank account, garnish your wages, and/or arrest and put you in jail. How is that any different than the mafia? Governments demand we “pay our dues” regularly, promise us we’ll be safe and protected if we do, and if we don’t, agents come around to shake us down or put us away. 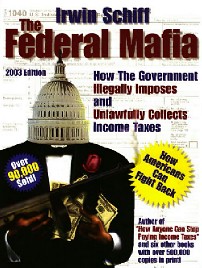 If taxes were voluntary then governments wouldn’t automatically be immoral or criminal because they would be completely funded by donation only, thus their very existence limited by voluntarism. If governments actually did a good job and spent our money wisely, then people might willingly donate for social programs, roads, schools etc. but when taxes are compulsory and a huge percentage of them goes towards lining the pockets of politicians, I can’t help but think privatization of social programs, road construction, schools and everything else the government unsatisfactorily provides us would be better for society by letting the free market and small communities/neighborhoods decide instead of our immoral, criminal governments.

Another mandatory tax and despicable limitation that all governments enforce is our natural right to international travel. In reality, the world is round and one undivided whole. All divisions such as countries and borders are merely man-made thought-constructs with no reality outside our minds. They are just arbitrary lines drawn on a map that governments are constantly changing. But everyone has to be born somewhere, so governments quickly brand you with the curse of “Nationality” the instant you are born. Now I am “American” because I was born within the arbitrary borders of the fictional construct known as “America.” Since I’m “American” but I’ve made the decision to live outside the arbitrary borders of the fictional construct I was born in (“Thailand”), I have a whole new series of taxes and government mandates that apply. I am required to carry around an expensive micro-chipped passport ID and check in with the immigration office every 3 months to fill out some paperwork and give them more money. Every 6 months to a year I am required to cross the arbitrary borders of the fictional construct known as “Thailand” into a neighboring tax farm’s embassy, where I must fill out more paperwork and give them yet more money for temporary Visa stamps in my passport. To work abroad governments require us slaves to submit work permits and pay annually for the privilege. The taxes and headaches never end. Thanks to being “American” I’m actually “lucky” that I can live abroad at all and should be happy! Many people from less fortunate tax farms are completely restricted from traveling to or working in other more fortunate tax farms.

Another one is land rights. How can you honestly claim to be a “landowner” when you have to pay property taxes every year for as long as you “own” it? If you own it, why do you still have to pay annual rental fees? The government holds the allodial titles and just issues you a slave deed. They maintain eminent domain and can plow over your home to build a highway any time they please.

Name one thing that governments provide, that people couldn’t do better, easier, and more efficiently privately at the community level. Name one reason why we all need to run this never-ending hamster wheel of government mandate and taxation.

Government is immoral because it violates two fundamental moral axioms that every civilized human being takes for granted. Number 1, the non-aggression principle, you do not initiate the use of force against your fellow man, woman or child. Number 2, property rights, we own ourselves, we own the effects of our actions. Government violates the non-aggression principle by creating a monopoly of force, a small group of people with all the guns on the planet who get to order everyone else around and people are always shocked that this concentrated, unlimited application of violence to the solution of complex social problems always goes wrong. They steal, and they lie, and they are essentially a criminal organization, and attempting to manage, and control, and minimize a criminal organization doesn’t work. Minarchism, or the goal of minimizing government through political action is just another government program and it does exactly the same thing as all other government programs; it achieves the opposite of it’s intended goal which is why government keeps getting bigger and bigger the more we try to make it smaller and smaller. -Stefan Molyneux