The “official” establishment version of the Holocaust suggests that during World War II six million Jews were taken captive and exterminated in Nazi concentration camps. This may very well be the case, but as we know the winners write history, and in order to maintain control the Zionist globalist establishment must firmly defend their version of events even in the face of overwhelming evidence to the contrary. If six million really did die, then questioning this figure, researching the facts and scrutinizing the evidence surrounding the Holocaust should and would prove their story. But thanks to organizations like the Anti-Defamation League, the Southern Poverty Law Center, AIPAC, and other Zionist apologist groups, simply questioning the official version of the Holocaust has become dangerous. 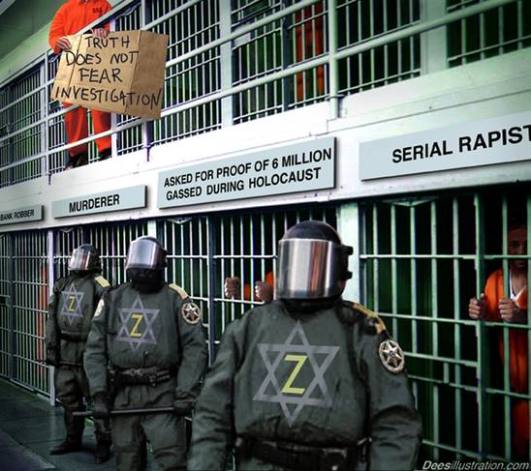 All over Europe “Holocaust Denial” (their Orwellian pigeon-hole term for questioning “official” history) is ILLEGAL and has resulted in many lengthy imprisonments! Authors, professors, and researchers like Sylvia Stolz, David Irving, Germar Rudolf, Dr. Frederick Toben and many others have all spent years behind bars for simply speaking out about this taboo subject. One man, Ernst Zundel, has spent over 7 years behind bars simply for re-publishing a small, fascinating book called “Did Six Million Really Die?” 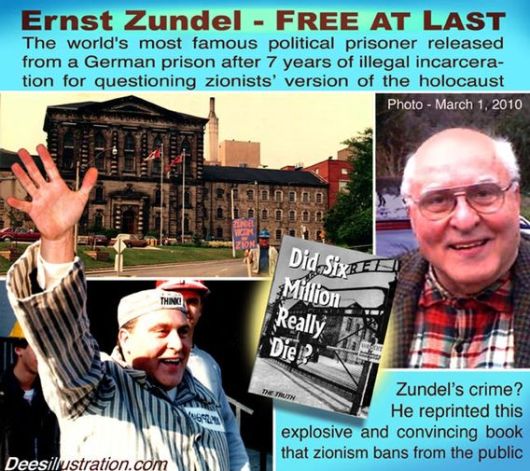 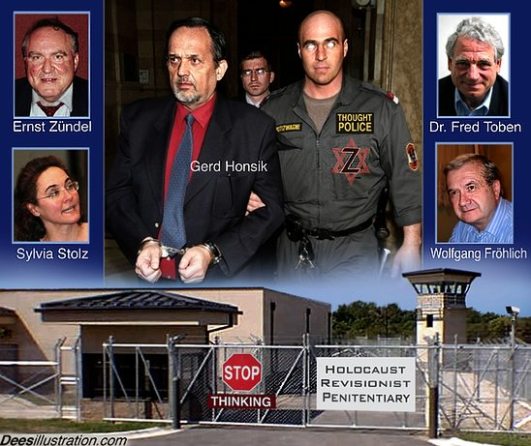 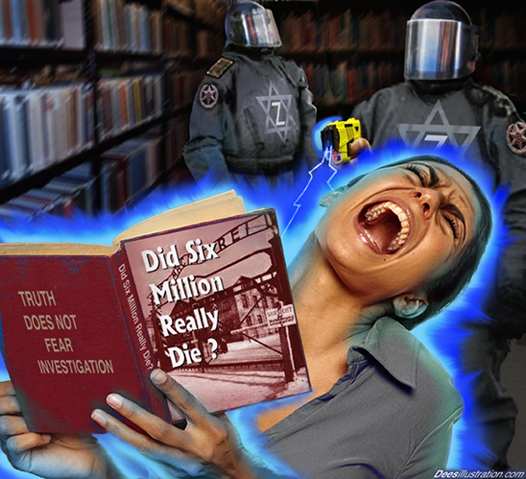 So what are some of the arguments made by these “criminal” Holocaust “deniers?” To begin with multiple Jew and Gentile sources alike confirm that there were no more than 3 million Jews in Germany during the Holocaust anyway. At the time, the entire Jewish population of Europe was only 6.5 million, and over half of them can be accounted for as living outside of Nazi Germany. The “official” story says that millions of Jews were put to death in gas chambers, but the chambers at Aushwitz, Dachau, and Mauthausen supposedly responsible for millions of deaths do not have the necessary sealed doors, frames, or tall chimneys required and forensic examinations of the sites have revealed no residue of anything toxic ever being used there. Establishment historians claim that Treblinka and Belzec are the sites of mass graves where hundreds of thousands of Jews were buried, yet scientists have shown using ground penetrating radar and core samples with 100% certainty that there are no mass graves and the ground has never even been disturbed. 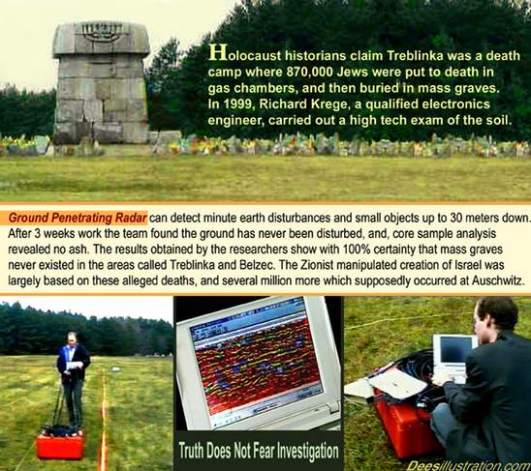 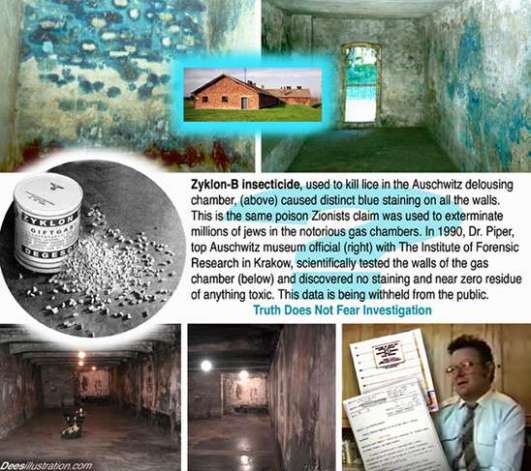 Of course, atrocity propaganda is nothing new. It has accompanied every conflict of the 20th century and doubtless will continue to do so. During the First World War, the Germans were actually accused of eating Belgian babies, as well as delighting to throw them in the air and transfix them on bayonets. The British also alleged that the German forces were operating a “Corpse Factory”, in which they boiled down the bodies of their own dead in order to obtain glycerin and other commodities, a calculated insult to the honour of an Imperial army. After the war, however, came the retractions; indeed, a public statement was made by the Foreign Secretary in the House of Commons apologizing for the insults to German honour, which were admitted to be war-time propaganda.

No such statements have been made after the Second World War. In fact, rather than diminish with the passage of years, the atrocity propaganda concerning the German occupation, and in particular their treatment of the Jews, has done nothing but increase its virulence, and elaborate its catalogue of horrors. Gruesome paperback books with lurid covers continue to roll from the presses, adding continuously to a growing mythology of the concentration camps and especially to the story that no less than Six Million Jews were exterminated in them. The ensuing pages will reveal this claim to be the most colossal piece of fiction and the most successful of deceptions; but here an attempt may be made to answer an important question: What has rendered the atrocity stories of the Second World War so uniquely different from those of the First? Why were the latter retracted while the former are reiterated louder than ever? Is it possible that the story of the Six Million Jews is serving a political purpose, even that it is a form of political blackmail? 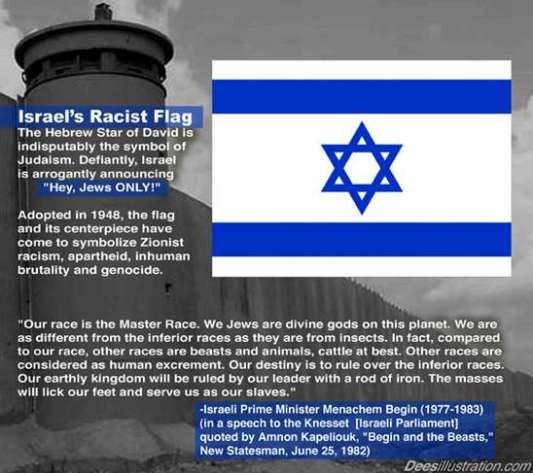 So far as the Jewish people themselves are concerned, the deception has been an incalculable benefit. Every conceivable race and nationality had its share of suffering in the Second World War, but none has so successfully elaborated it and turned it to such great advantage. The alleged extent of their persecution quickly aroused sympathy for the Jewish national homeland they had sought for so long; after the War the British Government did little to prevent Jewish emigration to Palestine which they had declared illegal, and it was not long afterwards that the Zionists wrested from the Government the land of Palestine and created their haven from persecution, the State of Israel. Indeed, it is a remarkable fact that the Jewish people emerged from the Second World War as nothing less than a triumphant minority. Dr. Max Nussbaum, the former chief rabbi of the Jewish community in Berlin, stated on April 11, 1953: “The position the Jewish people occupy today in the world—despite the enormous losses—is ten times stronger than what it was twenty years ago.” It should be added, if one is to be honest, that this strength has been much consolidated financially by the supposed massacre of the Six Million, undoubtedly the most profitable atrocity allegation of all time. To date, the staggering figure of six thousand million pounds has been paid out in compensation by the Federal Government of West Germany, mostly to the State of Israel (which did not even exist during the Second World War), as well as to individual Jewish claimants.

In terms of political blackmail, however, the allegation that Six Million Jews died during the Second World War has much more far-reaching implications for the people of Britain and Europe than simply the advantages it has gained for the Jewish nation. And here one comes to the crux of the question: Why the Big Lie? What is its purpose? In the first place, it has been used quite unscrupulously to discourage any form of nationalism. Should the people of Britain or any other European country attempt to assert their patriotism and preserve their national integrity in an age when the very existence of nation-states is threatened, they are immediately branded as “neo-Nazis”. Because, of course, Nazism was nationalism, and we all know what happened then—Six Million Jews were exterminated! So long as the myth is perpetuated, peoples everywhere will remain in bondage to it; the need for international tolerance and understanding will be hammered home by the United Nations until nationhood itself, the very guarantee of freedom, is abolished. -Excerpt from Did Six Million Really Die?

One Reply to “Why the Holocaust Denial?”