Surveyors, engineers and architects are never required to factor the supposed curvature of the Earth into their projects, providing another proof the world is a plane, not a planet. Canals and railways, for example, are always cut and laid horizontally, often over hundreds of miles, without any allowance for curvature.

One surveyor, Mr. T. Westwood, wrote into the January, 1896 “Earth Review” magazine stating that, “In leveling, I work from Ordinance marks, or canal levels, to get the height above sea level. The puzzle to me used to be, that over several miles each level was and is treated throughout its whole length as the same level from end to end; not the least allowance being made for curvature. One of the civil engineers in this district, after some amount of argument on each side as to the reason why no allowance for curvature was made, said he did not believe anybody would know the shape of the earth in this life.” 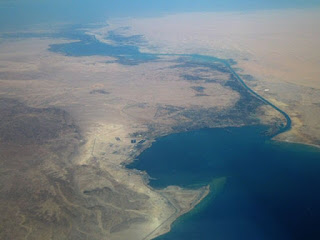 Another Surveyor and Engineer of thirty years wrote to the Birmingham Weekly Mercury, Feb. 15th, 1890 stating, “I am thoroughly acquainted with the theory and practice of civil engineering. However bigoted some of our professors may be in the theory of surveying according to the prescribed rules, yet it is well known amongst us that such theoretical measurements are INCAPABLE OF ANY PRACTICAL ILLUSTRATION. All our locomotives are designed to run on what may be regarded as TRUE LEVELS or FLATS. There are, of course, partial inclines or gradients here and there, but they are always accurately defined and must be carefully traversed. But anything approaching to eight inches in the mile, increasing as the square of the distance, COULD NOT BE WORKED BY ANY ENGINE THAT WAS EVER YET CONSTRUCTED. Taking one station with another all over England and Scotland, it may be stated that all the platforms are ON THE SAME RELATIVE LEVEL. The distance between Eastern and Western coasts of England may be set down as 300 miles. If the prescribed curvature was indeed as represented, the central stations at Rugby or Warwick ought to be close upon three miles higher than a chord drawn from the two extremities. If such was the case there is not a driver or stoker within the Kingdom that would be found to take charge of the train. We can only laugh at those of your readers who seriously give us credit for such venturesome exploits, as running trains round spherical curves. Horizontal curves on levels are dangerous enough, vertical curves would be a thousand times worse, and with our rolling stock constructed as at present physically impossible.” 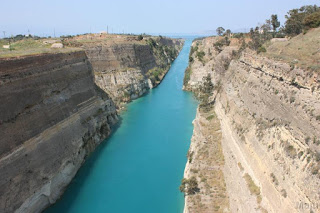 Engineer, W. Winckler, wrote into the Earth Review October 1893 regarding the Earth’s supposed curvature, stating, “As an engineer of many years standing, I saw that this absurd allowance is only permitted in school books. No engineer would dream of allowing anything of the kind. I have projected many miles of railways and many more of canals and the allowance has not even been thought of, much less allowed for. This allowance for curvature means this – that it is 8” for the first mile of a canal, and increasing at the ratio by the square of the distance in miles; thus a small navigable canal for boats, say 30 miles long, will have, by the above rule an allowance for curvature of 600 feet. Think of that and then please credit engineers as not being quite such fools. Nothing of the sort is allowed. We no more think of allowing 600 feet for a line of 30 miles of railway or canal, than of wasting our time trying to square the circle” 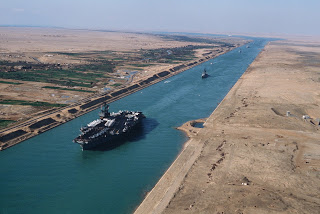 The Suez Canal which connects the Mediterranean Sea with the Gulf of Suez on the Red Sea is a clear proof of the Earth’s and water’s non-convexity. The canal is 100 miles long and without any locks so the water within is an uninterrupted continuation of the Mediterranean Sea to the Red Sea. When it was constructed, the Earth’s supposed curvature was not taken into account, it was dug along a horizontal datum line 26 feet below sea-level, passing through several lakes from one sea to the other, with the datum line and the water’s surface running perfectly parallel over the 100 miles. The average level of the Mediterranean is 6 inches above the Red Sea, while the floodtides in the Red Sea rise 4 feet above the highest and drop 3 feet below the lowest in the Mediterranean, making the half-tide level of the Red Sea, the surface of the Mediterranean Sea, and the 100 miles of water in the canal, all a clear continuation of the same horizontal line! Were they instead the supposed curved line of globe-Earthers, the water in the center of the canal would be 1666 feet (502 x 8 inches = 1666 feet 8 inches) above the respective Seas on either side!

“The distance between the Red Sea at Suez and the Mediterranean Sea is 100 statute miles, the datum line of the Canal being 26 feet below the level of the Mediterranean, and is continued horizontally the whole way from sea to sea, there not being a single lock on the Canal, the surface of the water being parallel with the datum line. It is thus clear that there is no curvature or globularity for the whole hundred miles between the Mediterranean and the Red Sea; had there been, according to the Astronomic theory, the middle of the Canal would have been 1,666 feet higher than at either end, whereas the Canal is perfectly horizontal for the whole distance. The Great Canal of China, said to be 700 miles in length, was made without regard to any allowance for supposed curvature, as the Chinese believe the Earth to be a Stationary Plane. I may also add that no allowance was made for it in the North Sea Canal, or in the Manchester Ship Canal, both recently constructed, thus clearly proving that there is no globularity in Earth or Sea, so that the world cannot possibly be a Planet.” -David Wardlaw Scott, “Terra Firma” (134)

“If the earth be the globe of popular belief, it is very evident that in cutting a canal, an allowance must be made for the curvature of the globe, which allowance would correspond to the square of the distance multiplied by eight inches. From The Age, of 5th August 1892, I extract the following: ‘The German Emperor performed the ceremony of opening the Gates of the Baltic and North Sea Canal, in the spring of 1891. The canal starts at Holtenau, on the south side of Kiel Bay, and joins the Elbe 15 miles above its mouth. It is 61 miles long, 200 feet wide at the surface and 85 feet at the bottom, the depth being 28 feet. No locks are required, as the surface of the two seas is level.’ Let those who believe it is the practice for surveyors to make allowance for ‘curvature’ ponder over the following from the Manchester Ship Canal Company (Earth Review, October, 1893) ‘It is customary in Railway and Canal constructions for all levels to be referred to a datum which is nominally horizontal and is so shown on all sections. It is not the practice in laying out Public Works to make allowances for the curvature of the earth.” -Thomas Winship, “Zetetic Cosmogeny” (23)

The London and Northwestern Railway forms a straight line 180 miles long between London and Liverpool. The railroad’s highest point, midway at Birmingham station, is only 240 feet above sea-level. If the world were actually a globe, however, curveting 8 inches per mile squared, the 180 mile stretch of rail would form an arc with the center point at Birmingham raising a full 5,400 feet above London and Liverpool. Adding the station’s actual height (240 feet) to its theoretical inclination (5,400 feet) gives 5,640 feet as the rail’s necessary height on a globe-Earth, more than a thousand feet taller than Ben Nevis, the tallest mountain in Great Britain!

“In projecting railways on a globe, the datum line would be the arc of a circle corresponding to the latitude of the place. That the datum line for the railway projections is always a horizontal line, proves that the general configuration of the world is horizontal. To support the globe theory, the gentlemen of the observatories should call upon the surveyor to prove that he allows the necessary amount for ‘curvature.’ But this is what the learned men dare not do, as it is well-known that the allowance for the supposed curvature is never made.” -Thomas Winship, “Zetetic Cosmogeny” (107) 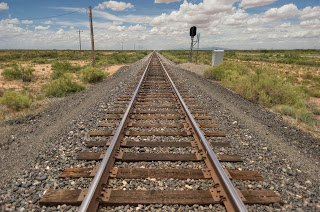 “In a long line, like that of the Great Pacific Railway, extending across North America, the supposed curvature would, of course, be proportionately great, extending to many miles in height, but not one inch was allowed by the engineers for curvature during the whole course of the construction of that vast line of Railway. And, if we think of it, how could it be otherwise? All Railway metals must, of necessity, be straight, for how could any engine or carriage run with safety on a convex surface?” -David Wardlaw Scott, “Terra Firma” (125)

J.C. Bourne in his book, “The History of the Great Western Railway” stated that the entire original English railroad, more than 118 miles long, that the whole line with the exception of the inclined planes, may be regarded practically as level. The British Parliament Session in 1862 that approved its construction recorded in Order No. 44 for the proposed railway, “That the section be drawn to the same HORIZONTAL scale as the plan, and to a vertical scale of not less than one inch to every one hundred feet, and shall show the surface of the ground marked on the plan, the intended level of the proposed work, the height of every embankment, and the depth of every cutting, and a DATUM HORIZONTAL LINE which shall be the same throughout the whole length of the work.”

“One hundred and eighteen miles of LEVEL railway, and yet the surface on which it is projected a globe? Impossible. It cannot be. Early in 1898 I met Mr. Hughes, chief officer of the steamer ‘City of Lincoln.’ This gentleman told me he had projected thousands of miles of level railway in South America, and never heard of any allowance for curvature being made. On one occasion he surveyed over one thousand miles of railway which was a perfect straight line all the way. It is well known that in the Argentine Republic and other parts of South America, there are railways thousands of miles long without curve or gradient. In projecting railways, the world is acknowledged to be a plane, and if it were a globe the rules of projection have yet to be discovered. Level railways prove a level world, to the utter confusion of the globular school of impractical men with high salaries and little brains.” -Thomas Winship, “Zetetic Cosmogeny” (109)

“That in all surveys no allowance is made for curvature, which would be a necessity on a globe; that a horizontal line is in every case the datum line, the same line being continuous throughout the whole length of the work; and that the theodolite cuts a line at equal altitudes on either side of it, which altitude is the same as that of the instrument, clearly proves, to those who will accept proof when it is furnished, that the world is a plane and not a globe.” -Thomas Winship, “Zetetic Cosmogeny” (126)

One Reply to “Surveying and Engineering”