The idea that humans must consume animal flesh and excretions as part of a balanced diet is a monstrous myth long symbolized and propagated by our unhealthy Illuminati food pyramid:

The entire top three levels of the pyramid are not by any means necessary or conducive to good health. There is not a single vitamin, mineral, nutrient, phyto-nutrient, amino-acid, fatty-acid, protein-chain, omega, or any other such elusive vital ingredient to health, not a single thing found in meat or dairy products that cannot be found, in greater abundance and more optimally, in the plant kingdom. For instance there are more omegas in seaweed than in fish, over twice as much protein in spinach than steak, and four times more calcium in sesame seeds than in milk. An actual healthy food pyramid would look something like this picture. 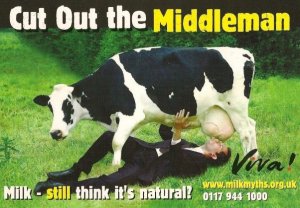 Meat and dairy products are highly acidic, fattening, cholesterol-laden, artery-clogging, lymph-clotting, mucus-forming, constipating, difficult to digest, and full of worms, parasites, bacteria, metabolic waste, hormones, and chemicals. Eggs are actually unfertilized avian menstrual cycles, otherwise known as chicken periods. Milk is the puss and hormone-filled mammary excretions of a female cow and meant to nourish her young. None of these animal bits and pieces are beneficial or necessary for human consumption.

There is not a single chronic disease or deficiency exclusive to vegans. However, heart disease, cancer, tumors, cysts, MS, diabetes, and many other major health problems have all been cured by switching to a 100% vegan diet. Some of the strongest animals in nature like gorillas, elephants, moose, rhinos, hippos, and giraffes are all vegetarians. The idea that you need to eat another animal’s flesh to be strong is a ridiculous superstition. Shaolin martial monks, arguably the toughest men in the world, are all strict vegetarians. 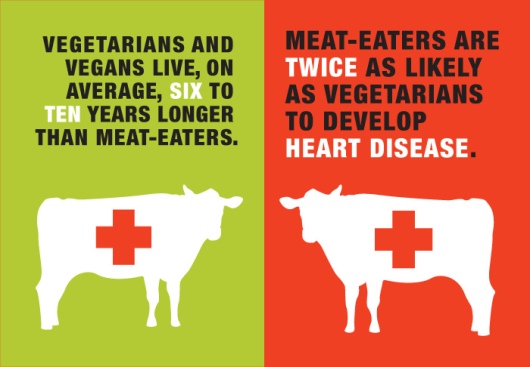 Our human anatomy is undeniably designed to subsist on plant foods and not on animal flesh; literally every aspect of our bodies proves we are herbivore / frugivores and not carnivore/omnivores. To begin with, humans and other natural vegetarians have 4x longer, convoluted intestinal tracts perfect for slow digesting fruits and starches, whereas omnivore/carnivores have 4x shorter intestines to quickly push out the acidic, putrefying animal flesh they eat.

All natural flesh-eaters also secrete the enzyme “uricase” necessary to metabolize the uric acid in meat, but uricase is not produced by our human bodies. Humans have lateral jaw movement and flat molars for grinding grains and vegetables whereas natural flesh eaters have no lateral jaw movement and scores of huge fangs for biting and ripping. Humans have short, weak fingernails whereas carnivores and omnivores have long, strong, sharp claws for cutting through skin and flesh. Humans must take in Vitamin C from our food whereas all carnivores and most omnivore’s bodies produce their own Vitamin C. Natural omnivores and carnivores also have a microbial tolerance far higher than humans. For example the botulinum toxin which is deadly to humans but is easily and safely digested by natural flesh-eaters. Humans eating a high fat diet become obese, lazy, and diseased whereas natural flesh eaters stay trim, energetic and absolutely thrive on their high fat diet. Human vision is easily able to differentiate various colors making it simple to discern ripe from unripe plant foods, whereas the color vision of most omnivore/carnivores is far less discerning. Humans sleep only 6-12 hours a day like most herbivore/frugivores, whereas most omnivore/carnivores sleep 18-20 hours a day. Humans sweat from pores all over our bodies whereas all carnivores and most omnivores release perspiration from their tongues. Humans have single births and two mammary glands whereas most all omnivores and carnivores birth litters of several babies have have rows upon rows of mammary glands.

Again, there is not a single chronic disease or deficiency exclusive to vegans, nor a single vitamin, mineral, nutrient, phyto-nutrient, amino-acid, fatty-acid, protein-chain, omega, or any other such elusive vital ingredient to health, not a single thing found in meat (or dairy) products that cannot be found, in greater abundance and more optimally, in the plant kingdom. Put simply, humans are biologically built vegetarians. “In using comparative anatomy to determine what man was ‘meant’ to eat, we should look at the species most similar to man, namely the anthropoid apes – chimpanzees, gibbons, gorillas, and orangutans. Of all animals, man’s digestive organs and teeth most closely resemble these apes. In captivity, some of these animals will eat meat if forced to rather than starve to death. But in the wild, all eat a vegetarian diet. Another strong clue that man is naturally a vegetarian is the fact that vegetarians in general are much healthier than omnivores. The American Dietetic Association has acknowledged that vegetarians are less at risk for a number of chronic diseases, including heart disease, some types of cancer, obesity, high blood pressure, and adult-onset diabetes … Eating a healthy diet goes far beyond cutting back a bit on red meat. In a recent study of 6,500 Chinese, Dr. T. Collin Campbell of Cornell found that even though the Chinese overall eat only a fraction of the animal protein Americans do, those who ate the least animal protein nonetheless had lower risk of disease than the average Chinese. Dr. Campbell concludes, ‘We’re basically a vegetarian species and should be eating a wide variety of plant foods and minimizing our intake of animal foods.‘” -Glen Kime, president, Vegetarian Society of Washington, D.C. All omnivores and carnivores eat their meat raw, tearing through fur/skin, and lapping up the nutrient-rich blood with their tongues. A true omnivore like a bear will take a fish out of the water and swallow it whole, uncooked, scales, bones, fins, head and everything. When a lion kills an herbivore for food, it tears right into the stomach area to eat the raw stomach, liver, intestines, and other organs that are filled with blood and nutrients. They will NOT eat cooked meat. For most humans, the smell and taste of raw bloody meat is putrid, so in order to consume it they must first clean, cook, season and marinate the flesh in various vegetarian herbs and spices to make it palatable. “The final point I would like to make on how we as humans were not meant to eat meat is this. All omnivorous and carnivorous animals eat their meat raw. When a lion kills an herbivore for food, it tears right into the stomach area to eat the organs that are filled with blood (nutrients). While eating the stomach, liver, intestine, etc., the lion laps the blood in the process of eating the dead animals flesh. Even bears that are omnivores eat salmon raw. However, eating raw or bloody meat disgusts us as humans. Therefore, we must cook it and season it to buffer the taste of flesh. If a deer is burned in a forest fire, a carnivorous animal will NOT eat its flesh. Even circus lions have to be feed raw meat so that they will not starve to death. If humans were truly meant to eat meat, then we would eat all of our meat raw and bloody. The thought of eating such meat makes one’s stomach turn. This is my point on how we as humans are conditioned to believe that animal flesh is good for us and that we were meant to consume it for survival and health purposes. If we are true carnivores or omnivores, cooking our meat and seasoning it with salt, ketchup, or tabasco sauce would disguise and we as humans would refuse to eat our meat in this form.” -Dr. Akilah El Finally, plain moral decency and ethics should be reason enough to end this animal holocaust. Can you imagine if aliens came to Earth and treated humans the way we treat cows, pigs, and chickens? If aliens kept us locked together in tight cages, fattened us up, cut our noses and balls off, raped our women, chained down our children, then killed and ate us when we were the most tasty, would you see anything wrong with that? And for the anti-war meat-eaters out there: Need I point out the hypocrisy? If you kill innocent, defenseless animals every day just because you like the taste, then go around pretending you’re “anti-war,” you’re only fooling yourself.

9 Replies to “The Meat/Dairy Myth”