Having been an active figure in the conspiracy community over 10 years now, I can safely and confidently say that Alex Jones and David Icke, the world’s two most popular conspiracy theorists, and Above Top Secret, the world’s biggest conspiracy forum, are in fact controlled opposition working directly with the government / corporate powers that be. In the following videos I expose facts like Alex Jones’ and AboveTopSecret’s C.I.A. connections and explain the nature of intelligence agency honeypots, how they effectively gather intel, poison the well, and control the conspiracy opposition by leading it.

Before becoming a conspiracy guru, David Icke was a BBC presenter, a professional soccer goalie, and a Green party politician. Such high level versatility in Media, Sports, and Politics is generally reserved for the super-rich, the well-connected and/or Freemasons, and I thought David Icke was none of the above. How did he get so lucky? Next he comes out and claims to be the Son of God on national TV while wearing a turquoise tracksuit. Whether intentional or not, the forth-coming mass ridicule positioned him as a martyr (Jesus) for the “truth” movement.

Years ago Alex the Judas Goat Jones was asked his opinion of David the Reptilian Icke. Alex responded that David Icke put out lots of good information, but that like the proverbial turd in a punch-bowl, some of Icke’s more far-fetched theories discredited his whole message.  Between obsessing over turquoise talking about channeled messages of divine lineage, years of ignoring the Jewish Question, the Moon Landing Hoax, and Controlled Opposition, and now reading David’s latest book about how reptilian aliens supposedly control humanity through mind control beams from the hollow moon, I tend to agree with Alex’s turd assessment.  However, evidence has also long been piling up that Alex himself is not the knight in shining armor he claims to be either.  In fact news recently broke that Alex’s editor-in-chief Molly Maroney at Infowars works for the CIA/Stratfor Intelligence.

I started this thread on David Icke’s forum to help expose the breaking Molly-Gate story and it quickly gathered 40 posts and 4,000 views from several researchers sharing critical information exposing Alex Jones.  Then yesterday I woke up to find that David Icke forums deleted our entire excellent thread and banned my account from posting anymore!  Wouldn’t you think this Molly-Gate Alex Jones CIA Stratfor Scandal would be top news on any authentic conspiracy forum!?  Why would this thread be deleted and Eric Dubay banned from David Icke’s forum for exposing such important information? 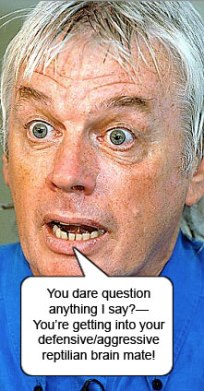 One of the first posts I ever made on AtlanteanConspiracy.com was regarding the popular conspiracy forum Above Top Secret.com and how their admitted Freemason moderators censored and banned me for exposing Masonry.  David Icke’s moderators don’t openly admit to being Masons, but just like on ATS there is a band of Freemasons on Icke’s forum 24/7 for years (I’ve been contributing there all hours of the day for 5 years) with tens of thousands of posts each, day-in day-out relentlessly using typical disinfo tactics to denounce, detract and distract from any threads exposing their society.  We even caught them signing in to dummy accounts to come back and agree with themselves.  Why are Masons with sock accounts allowed to endlessly defend their crooked organization on Icke’s forums, but fellow conspiracy researcher Eric Dubay gets censored and banned for just once trying to expose Alex Jones? 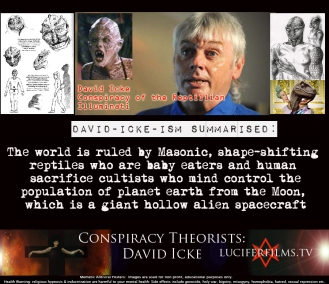 David Icke is a regular guest on Alex Jones’ radio show, why doesn’t David ever drill Alex or expose the other false gurus in the conspiracy community… unless David is controlled opposition himself?  Traveling all over the world giving hypnotic 9 hour lectures to packed auditoriums, selling a new book every year, worked for the BBC, the Green party, and professional sports, appeared on the Wogan show twice, claimed he was the messiah, got crucified for it, and then rose again.  David Icke’s career, like Alex Jones’, has all the hallmarks of being a controlled opposition agent.  The fact that he’s still alive, on television, traveling to over 50 countries “exposing” the “elites” and hasn’t been murdered like Bill Cooper, just that fact alone raises serious suspicion as to Icke’s authenticity, not to mention all the shape-shifting reptilian hollow-moon mind-control beam stuff!

Years ago, at the edge of the rabbit-hole, I’ll admit I looked up to these two men and their work encouraged me to see through the looking glass.  However, having researched and dug deep down the rabbit-hole for myself, having met and shared with many other genuine truth-seekers along the way, I can now quite clearly see that beneath their inviting charismas, beyond the 90% of good information they bring to the table, both Alex Jones and David Icke have a disturbing 10% full of distraction and misinfo that completely muddies their waters much like a couple of big turds in the conspiracy punch-bowl. 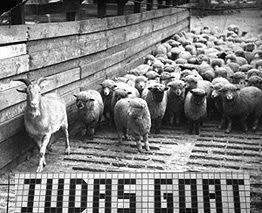 Alex Jones, the most influential and well-known man in the conspiracy community, has now been exposed by dozens of reliable colleagues in the truth movement as being a Judas Goat. A Judas Goat is a trained goat used at slaughterhouses, a good-looking alpha-male type who they send in to associate with the sheep/cattle then lead them aloof onto trucks and into slaughterhouses, while its own life is spared. The list of people Alex has lied to, short-changed, betrayed, or double-crossed in the truth movement has continued to grow to the point that it is glaringly obvious just who/what Alex Judas Goat Jones is. 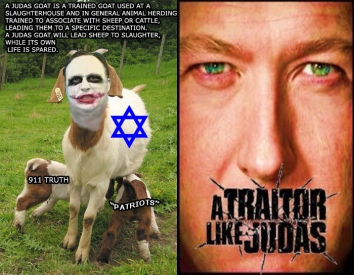 Bill Cooper exposed Alex Jones as a “bold-faced cowardly liar” on his radio show and was shortly thereafter shot dead at his home by government agents.  Jack Blood, a former employee, exposed (among several other things) how he was forced to tote the “official infowars position” and how Alex doesn’t even sign his own “autographed videos.”  Fellow Austinite Shelly Tumbleson exposed how Alex has repeatedly lied about the infamous “Parking Lot Incident” where he was supposedly attacked by 4 government agents.  Mark Dice, a long-time supporter of Alex, has now come out against him and exposed how Alex’s Tangy Tangerine product contains arsenic, lead, mercury and other poisons.  US Army veteran Gregory Pitchford and celebrity Tila Tequila were both recently lied to and betrayed by Alex Jones.  Leonard Horowitz and Sherry Kane have exposed Alex on several occasions linking him with Cointel Pro controlled opposition.  Eric Phelps, Craig Oxley and Thomas Richards have thoroughly exposed Alex Jones’ gate-keeping of the Vatican/Jesuit issue.  Mike Delaney of ProThink.org and ZionCrimeFactory.com has thoroughly exposed Alex Jones’ funding by, marriage to, and gate-keeping of Zionists.  Even though Alex is the self-proclaimed grandfather of the 911 truth movement, he won’t have Dr. Judy Wood on his show or even mention her name, instead degrading her with the moniker “Marvin the Martian.”  Fellow Austinite Catherine Bleish had her 2nd Ammendment Rally completely co-opted and ruined by Alex.  I have also personally been snubbed by Alex Jones after exposing the Moon Landing Hoax, and the list just keeps growing. 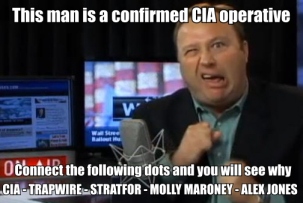 Myself and several others in the alternative research community have long suspected Infowars.com as being a Stratfor Zionist/CIA operation, and now thanks to Pete Santilli and Sherrie Lea it has come out that Molly Maroney, Infowars editor-in-chief, admittedly worked for Stratfor and the CIA.  Now who’s the turd in the punch-bowl Alex!?  This scandal being deemed Molly-Gate is absolutely the smoking-gun that exposes Alex Jones and his entire operation as being a Stratfor/CIA front. 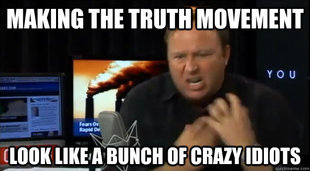