In 1933, 33rd degree Freemason Franklin D. Roosevelt added the Great Seal to the US Dollar, transforming it into an occult Talisman. The same year he signed a Gold confiscation order and took the US off the gold standard. At a press conference on March 8th, 1933, he joked, “As long as nobody asks me whether we are off the gold standard … that is alright, because nobody knows what the … gold standard really is.” 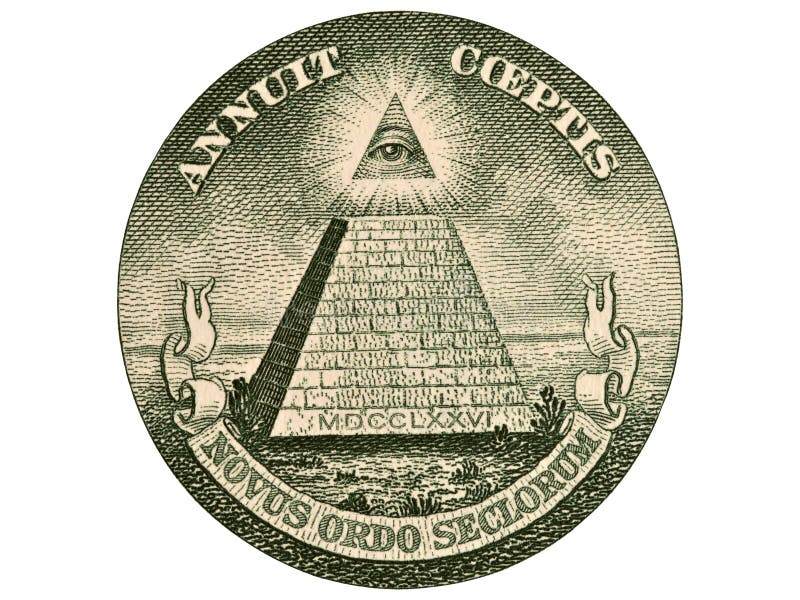 “The 33rd degree Freemason and Black Nobility president, Franklin Delano Roosevelt, had this symbol printed on the dollar bill from 1933. It was a symbol of secret societies in Europe long before anyone heard of the United States and it is awash with Freemasonic and secret society symbolism going back to the ancient world.” -David Icke, “The Biggest Secret” 353

Notice the symbology and numerology used on the dollar bill. The most obvious symbol is the Illuminati pyramid with the hovering all-seeing eye in the capstone. Opposite this is the “all-American” Eagle with a down-turned US flag affront its chest. These and many other symbols on the dollar come from the ancient Stellar, Solar, and Lunar cults.

“The Pyramid is for the Stellar Cult, as are the various stars that appear on the bill. The Golden Eagle is for the Solar Cult. The Eagle is the symbol of America because it signifies the constellation in Scorpio called Aquila. Scorpio is the sign of power, money and wealth, as well as secret knowledge. (The U.S. elections are held right n the middle of Scorpio and the birthday of America is in the Scorpionic decanate of Cancer.) The color green also relates to the Solar Cult. The number thirteen, which appears frequently on the dollar bill stands for the Lunar Cult. There are thirteen months in the Lunar Year. (America originally had thirteen States. London is made up of 28 boroughs, this being the number of the Lunar ‘mansions.’) Thirteen is also a Stellar Cult numeral, much used by the Israelites and other Semitic tribes and nations. Then there are the watermarks, or ‘moon letters,’ for the Lunar Cults.” -Michael Tsarion, “Astrotheology and Sidereal Mythology”

The double-headed eagle symbol which came from Babylon and survived through the Scottish Rite of Freemasonry has been today adopted by America, Mexico, Israel, Germany, France, Chile, Italy, Honduras and many others.

“The eagle is a widely used Brotherhood symbol and it can be found on the coats of arms of many countries, including Egypt, Libya and Iraq. It was a major symbol for the Nazis in Germany and it appears in the designs of pulpits and lecterns used by the Christian Church. Seals like the one used in the Great Seal of the United States can be traced back to at least 4,000 BC in Egypt, Babylon, Assyria and India.” -David Icke, “The Biggest Secret” (353)

The word “mon-ey” comes from the Lunar cults. Early words for the Moon were “mon” and “min” giving us “mon-ey” printed at a “min-t.” We have a global “mon-archy” that controls the world’s “mon-ey” supply. We have finance “min-isters,” prime “min-isters” and their “min-istries” being controlled by occult elites/societies. “Mon-ks” perform “mon-thly cere-mon-ies” in “mon-asteries.” It is interesting to note that the plant “mint” is green, our “mon-ey” printed at the “min-t” is green, and the Isis moon goddess Statue of Liberty is green. Someone who is ignorant is green. Moon-lovers are “luna-tics,” from the French; They are “mon-sters.” You can see how the elite esoterically worship the moon continuing the Lunar cult, while exoterically condemning and marginalizing it.

“You will see beneath the pyramid seventeen seventy-six, spelled out in Roman Numerals, plus the words, Annuit Coeptis, and is translated as Annuit, our enterprise. Coeptis is translated to mean ‘crowned with success,’ or ‘is crowned with success,’ therefore, Annuit Coeptis is ‘our enterprise, which is now a success.’ Then in order to find out what enterprise was a success, read on the one dollar bill at the bottom of the pyramid, Novus Ordo Seclorum. Which translates as the ‘New Order of the World’ – The New World Order! Now, we must remember that Germany was the home of the concept of The New World Order. Adolph Hitler’s entire motivation was to establish a new world order.” -Jordan Maxwell, “Matrix of Power”

The Latin translation of Annuit Coeptis Novus Ordo Seclorum is “Our New World Order is Crowned with Success.” The other Latin phrase E Pluribus Unim means “One Out of Many.” Order out of Chaos. The Hegelian dialectic. The problem-reaction-solution paradigm used by the elites to drive world events, opinions and policies. There are 13 letters in Annuit Coeptis and 13 letters in E Pluribus Unim. The dollar encodes the number 13 repeatedly. There are 13 stars above the eagles head, 13 steps on the Pyramid, 13 vertical bars on the shield, 13 horizontal stripes at the top of the shield, 13 leaves on the olive branch, 13 arrows, 13 fruits, and 13 numbers.

“You will find on the dollar bill, the eagle, which comes from the ancient concept of the Phoenix, and has thirteen stars above it. The thirteen stars are arranged in the configuration of the Star of David, or the hexagram. Most people think the thirteen stars represent the original thirteen colonies. In the first place, why did they have to have thirteen colonies? Why couldn’t they have twenty-seven, or four, or ten? When one understands that the number thirteen is a very important, profound Masonic number, and that many of the founding fathers of this country were Freemasons, as well as Rosicrucians, then you will follow this connecting thread of material to see what was actually being created. They knew what they were doing when they divided this country into thirteen colonies. The number thirteen is not an unlucky number for them. It is an unlucky number for you.” -Jordan Maxwell, “Matrix of Power”

If you draw a six-sided “Star of David” around the pyramid on the back of the dollar, 5 of the 6 corners will point to letters: A,S,M,O,N or when you re-arrange them, MASON.